I'm sitting here on the font porch swing, browsing and typing on my trusty HP 2133. It was the first netbook that I bought, a bit over two years ago.
Written by J.A. Watson, Member blogger on April 3, 2011

I'm sitting here on the font porch swing, browsing and typing on my trusty HP 2133. It was the first netbook that I bought, a bit over two years ago. Since then it has really done Yeoman's Duty. It has been on numerous trips with me, both long and short, it has been dragged all over Switzerland in my backpack, and of course it has been used around the house, on the porch, in the garden, and wherever else. I will be going to Iceland for a couple of weeks this summer, and I expect to take it with me then as well. It isn't sleek, or stylish, it doesn't have a very large screen by today's standards, and the touchpad buttons take a bit of getting used to. The keyboard, by contrast, is a masterpiece. It is listed as 92% of a full-sized keyboard, but I honestly feel very little difference in the main typing area. The keys are large and have a comfortable feel, and the layout is good.

My current favorite Linux distribution on it is SimplyMEPIS 11 (RC1). Although it is still a Release Candidate, I have had no problems with it at all. It boots and installs from a USB stick, and the resulting desktop is well-proportioned for this 8.9" 1024x600 display: 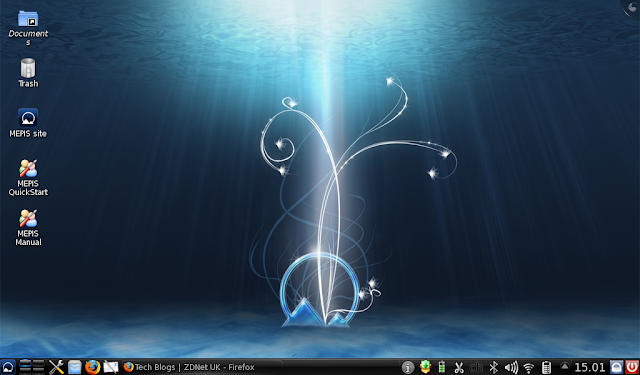 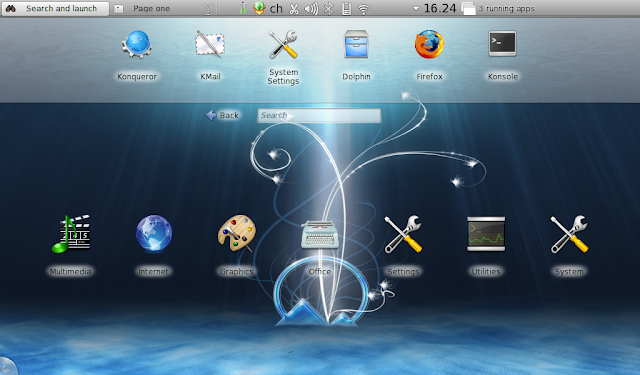 Things haven't always been so rosy for the Mini-Note, of course. When it first came out the hardware was so different from everything else available at the time that I had lots of problems getting any Linux distribution to run properly on it. Here are a few examples:

- The VIA C7-M cpu frequency stepping wasn't working, causing the CPU to run at full speed all the time. The one significant flaw in the Mini-Note is that it can run rather hot, and this really aggravated that problem. It took a few months for the necessary changes to be worked out and incorporated in most Linux distributions.

- The VIA Chrome9 graphic adapter was a nightmare at first. I think a large part of this problem was VIA's confusing, wishy-washy and sometimes misleading statements about open-source driver development. In the end they never really produced anything that was generally useful, but fortunately the FOSS openchrome driver at least got far enough to provide reliable 2D performance, and it has since been included in most of the popular Linux distributions. There is still no 3D or high performance graphic support for the Chrome9 adapter, though.

- The Broadcom 4312 WiFi adapter was still rather new when the 2133 came out, so it suffered from some of the same problems that its successor 4313 adapter has today.. Once again, sub-optimal support from Broadcom aggravated this issue. It works just fine now with the latest b43 driver, but several of the most common distributions use the alternative STA/wl/broadcom-wl driver, which still has significant performance and throughput problems.

- The VIA VT1708/A High Definition Audio Controller drove a lot of audio drivers (and audio users) crazy for a long time. It is now handled by the HDA Intel driver.

I'm sure there were a few other problems which I am forgetting at the moment, but these were the biggest ones that I had to deal with. The important thing is that every one of these has been worked out, so many Linux distributions today just install and run with no problems, no fiddling, adjusting or downloading of additional drivers or firmware.

In addition to SimplyMEPIS, I have quite a few other Linux distributions installed on this Mini-Note. Here is a list, and a few short observations about some of them:

- openSuSE 11.4: I had to install the openchrome driver from the SuSE Build Service, and download the b43 firmware using the script provided in the openSuSE distribution. Once those were done everything worked just fine, and until I recently installed the SimplyMEPIS 11 RC, this was my favored distribution on the Mini-Note.

- PCLinuxOS 2010.12: Something in this distribution absolutely insists on using the wl wireless driver, and I haven't been able to figure out how to get it to use b43.

- Ubuntu 10.10 Maverick Meerkat: I couldn't install the Netbook Edition because of the lack of 3D graphic support, so I use the standard distribution. After installation you have to choose between the STA and b43 drivers; I am using STA because there was an issue with b43 causing Ubuntu to hang, but that might be fixed by now. As Ubuntu has put me off more and more with their changes and general fiddling about, I have gotten less and less interested in actually getting it to work properly on a lot of systems. In fact, when the Netbook Edition barfed and refused to install on the 2133, I almost didn't bother at all.

- Zenwalk Linux 7.0: I was surprised at how easily this installed, and how well it works. There is a problem with the sound that I haven't tried to track down yet - it if weren't for that, Zenwalk would be threatening MEPIS as my favorite distribution on the Mini-Note.

- Pinguy OS 10.10.1: I installed this just to see if I could, and if it would work. It does install, and it does work, but the lack of 3D graphics makes it fairly unpleasant to use.

- Windows XP Professional: I can't remember the last time I booted this, and I can't imagine why I would anyway.

In summary I would say that my first netbook purchase turned out to be one of the best. I've only had one or two netbooks since that I liked anywhere near as much as this one. Not long after getting this one, I bought an HP 2140 for a friend, which was essentially the same package with a 10" display and Intel/Atom chipset. I'm sure that makes it a "better" system all around - it doesn't have the temperature problems that the 2133 does, it has a bigger display, and it doesn't have the weird chips and driver problems that the 2133 has had. But the truth is, I probably wouldn't trade my 2133 for a 2140, there's just something about the character of the 2133 that has really endeared it to me.

Oh, and one last thing - battery life. The Mini-Note is certainly not on a par with the latest generation of low-voltage chips and high-capacity batteries which yield 5 hours or more of battery life. But it's not the worst in this category either. I've been writing this while running on batteries, rebooting several times to check other installations, and generally keeping the system actively running. It's been over two hours, and the battery monitor still says 36% remaining. I would guess that I get a bit over three hours, and that's not bad for a two year old system.