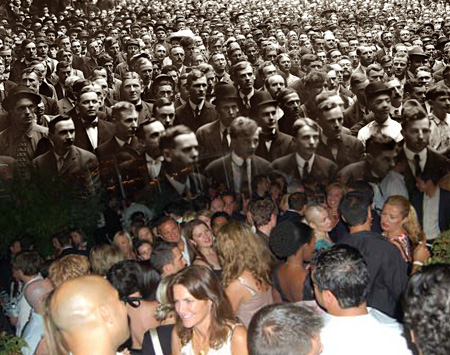 It seems everywhere you turn these days there's an excitable story about Twitter, the microblogging tool that is a mystery to some people, a miracle to others, and a service some are noisily evangelizing in hope of self publicity.

As Twitter scales up in user numbers, the level of hysteria seems to be going through the roof. Along with a huge army of self proclaimed social media experts, most of whom appear never to have actually worked on or been around a grown up marketing campaign in their lives, we also have the bullhorn aggregator brigade - the folks that busily hoover up information and then breathlessly and sometimes bossily rebroadcast to anyone listening.

Old enough to remember when 'desktop publishing' started to put the early crude digital graphic design tools into the hands of enthusiastic people with no design ability? That's where the social media circus is in its development curve, with honorable exceptions.

Long form blogging went through a 'trough of disillusionment' to use analyst Gartner's bizarre term, after the early flurry of excitement a few years ago. After the initial burst of innovators we had great hordes of people who thought regurgitating other peoples ideas and thoughts was 'blogging'. These people are still busily cutting and pasting and writing en masse and nobody is reading their stuff because they have nothing to say.

The same thing is increasingly happening, in a shorter format, with micro blogging. Just as the craze for RSS feed evidence that your long form blog must be interesting because of the number of 'readers', proudly displayed on the blog front page, we now have the 'follower' phenomenon - if thousands of folks are following you on Twitter that must mean you carry some weight in the universe.

There seems to be an odd momentum where the more Twitter followers you accumulate, the more folks follow you on the basis of your following. We've already had the Twitterank fiasco, where people signed up for a service which generated a meaningless number that supposedly gave you a 'rank' of importance, and there are various other free online 'metrics' services that massage your ego with evidence of your popularity.

I smell Beanie Babies, Housing Bubbles and Dutch Tulip Manias - there's a frenzy around followers that will boom and bust.  Few people know why these various followers are of value apart from to try and sell to them, often in a way that would be very at home on the home shopping channel, ideas, services and stuff.

Apart from the folks who are flipping ideas - strip mining the web and in some cases their work experience for stuff they can repackage and rebroadcast, often within a very short time frame - there are the crowd sourcers.

Some of this crowdsourcing is innocuous timewasting - "what's your favorite #westernfilm, friends? TGIF!" - and some questionable requests for information that will presumably be used for personal gain. There is even a strain of Twitter 'Chuggers' (a UK term combining 'charity' and 'mugger' for people who accost you in the street and try to get you to sign up for the cause they represent, or at least donate to it). In a business team environment any sort of collaboration device is usually preferable to  telephone calls, emails with attached MS Office files and all the other time eating one to one conversations that slow projects down.

There's no denying microblogging is a useful, if largely insecure, collaboration tool: where instant messenging is basically a one to one communication tool, Twitter is a one to many device as I'm sure you're sick of hearing by now.

Twitter, and an ever increasing number of business oriented clones, do have great utility if there's a clear team use model.

On a public level however Twitter is all about who you're listening to. Ever been to an overcrowded party? There's often tons of complicated social hierarchy and hustle, some of which you don't understand,  and you probably wind up talking to the people who seem the sanest and most interesting in a corner where you can hear yourself speak.

There's an egomaniac making a lot of noise over there, a drama queen behind you, someone boasting about business to a large group of people they just met and someone else having a noisy emotional meltdown in the doorway. That's what Twitter can be like.

Anyone who has managed people will know how the above party scenario applies to work as well - just add the shy and the poor communicators...

This may all seem hard on Twitter and those inside the tech bubble, but we are now approaching a point where this embarrassingly named service is increasingly going mainstream. Just as the 'poking' feature in Facebook hasn't appeared in enterprise social network products, there are poking style aspects of Twitter which are confusing users who think it is merely an immature adolescent plaything.

Learning to filter out background noise and give and receive useful contextual information with people you value is the art of making Twitter useful. Like being at a party, just showing up doesn't mean you're going to have a good time. Quality not quantity is what builds reputation...