The bulk of the German Army—the dough feet of the normal infantry divisions—moved on shank's mare. The rifle companies' transport consisted of three-horse wagons, on which the troops loaded their packs, as did this outfit on campaign in Russia in the summer of 1941.
Written by Oliver Marks on Dec. 6, 2008 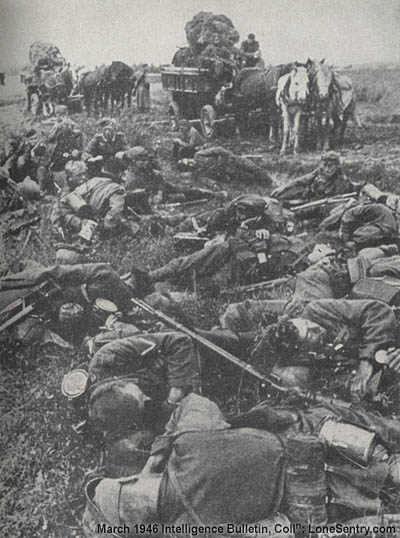 The bulk of the German Army—the dough feet of the normal infantry divisions—moved on shank's mare. The rifle companies' transport consisted of three-horse wagons, on which the troops loaded their packs, as did this outfit on campaign in Russia in the summer of 1941. Lone Sentry.com

Not many people know that the greatest use of horses in any military conflict in history was by the Germans in WWII: 80% of their entire transport was equestrian. Despite all the propaganda about Blitzkreig, formidable German R&D, industrial design and production, the day to day mechanics of that fighting force involved an average of 1.1 million horses throughout the war. Of the 322 German divisions in the middle of the war - 1943 - only 52 were armored or motorized.

The great bulk of the German combat strength—the old-type infantry divisions—marched into battle on foot, with their weapons and supply trains propelled almost entirely by four-legged horsepower. The light and mountain divisions had an even greater proportion of animals, and the cavalry divisions were naturally mainly dependent on the horse.

The allies by comparison enjoyed the strategic advantage of the USA's ability to mass produce motorized vehicles, with low unit cost and rapid quantity production, coupled with relatively easy access to fuel worldwide.

What's this got to do with collaboration? The reality is companies have to go to battle with the army they have, and that includes a great deal of legacy infrastructure for all but literally brand new firms. How you adopt new processes and associated technology, however, is frequently the differentiator between attempting to survive and winning.

The story of the automatic machine gun is worth bringing in here: Sir Hiram Stevens Maxim, an American who emigrated to England in the Jules Verne world of the 1880's, invented it in that era. He demonstrated his new automatic gun to the British military authorities, but;

The British army high command could see no real use for the oil-cooled machine gun he demonstrated to them in 1885; other officers even regarded the weapon as an improper form of warfare.

Two years later the British government placed an initial order for three in order to evaluate them. Although they passed all tests they were not picked up by the British military high command, who envisaged limited infantry use of such a weapon.

Arms salesman Basil Zaharoff made a much more favorable impression on the German high command later that decade, so when World War One broke out in August 1914 they had 12,000 available.

The British commanders continued to order the 'offensive spirit' of charging at these weapons of mass destruction, but they

...found to their repeated cost the futility of massed infantry attacks against well-entrenched defensive positions protected by machine gun cover. The first day of the (1916) Somme Offensive amply illustrated this, although the lesson appeared to be lost to the British high command. On the opening day of the offensive the British suffered a record number of single day casualties, 60,000, the great majority lost under withering machine gun fire.

The allies rapidly ramped up their machine gun production and tactical usage to achieve parity which led to a prolonged, dug in defensive conflict.

From a strategic perspective there are two analogies with management practice and associated IT. 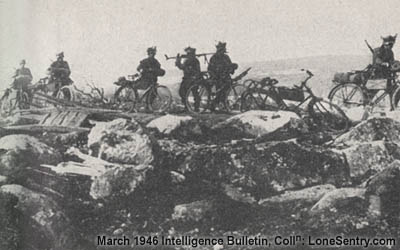 While the WWII German forces enjoyed significant air superiority during the early years of the war, they were ultimately overstretched on several fronts and limited by their transport infrastructure. The Russians had lend/lease Studebaker trucks while the Germans formed arctic bicycle reconnaissance battalions.(See above)

This allied transport advantage is analogous to a coherent collaboration strategy and associated environment. The ability to mobilize your entire workforce to be informed and move quickly is tactically key to executing strategy and gain competitive advantage.

Collaboration is primarily a human endeavor, and we constantly seek out tools and technologies to improve our ability to communicate, and to capture and disseminate information. Not being open minded about what will bring tactical advantage, as was the case with the British High command's opinion of Maxim's machine gun, can result in fatal failure when your competitors are more open minded and fast moving than you.

Legacy IT infrastructure can sometimes be the cavalry regiments of modern companies, requiring a lot of care and feeding but in reality reinforcing ponderous, old fashioned ways of doing things. Seeking tactical advantage that augments the status quo has never been more important than it is in the current economic climate. The First World War ended four dynasties: the German, Austro-Hungarian, Ottoman and Russian empires. It not hard to draw an analogy with what will happen to some global company's empires if they don't heed the lessons of history.

Command and control alone doesn't win wars, especially without a finely honed strategy; it's differentiators like Maxim's machine gun that make all the difference.

To continue this post's military theme, here's some video of Jeffrey A. Sorenson, CIO of the Department of the US Army, speaking last month at the Web 2 Summit conference. Sorenson talks about plans to deploy lightweight 'Stryker brigades' anywhere in the world within 96 hours, and the associated command posts of the future. This was a fascinating talk and demonstrated a sophisticated understanding of the power of collaboration technologies by the US military - at least in this slide deck - and also some fascinating insights into the cyber warfare aspects of the recent conflict in Georgia.