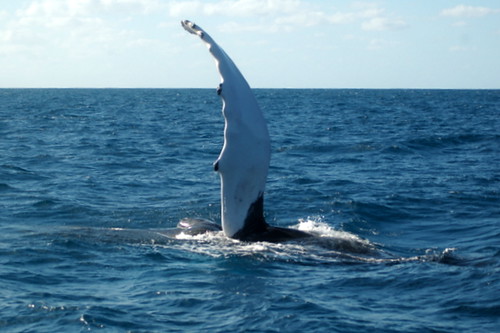 Wave and tidal apparatuses have emerged in many forms in their quest to harness the renewable, fairly predictable energy of the ocean's rhythms. Some examples are submerged windmills, buoys, snakes, and now whales. Well, not the whale-shape itself but its flippers.

The bumps, or tubercles, found on humpback flippers create vortices, helping the large cetaceans maintain lift as they cut through the sea. Wind turbine manufacturers have already been applying this idea to the leading edges of some blade designs. So it's no surprise underwater turbines would eventually follow this example of marine biomimicry as well.

At a recent meeting of the American Physical Society’s Division of Fluid Dynamics, researchers from the U.S. naval academy presented tidal turbine blades that might perform better during low-velocity tidal flows.

One important obstacle facing engineers is the difficulty of designing turbines that do not stall in slow-moving water. "A lot of the turbine designs, at very slow speeds, aren’t producing lift because the flow on the upper surface is separated," explains USNA mechanical engineering professor Mark Murray.

Comparing bumpy vs. smooth blades in a 120-foot tank at the academy, the researchers found the humpback-inspired blades won out. More research is needed, but the bumpy (or um humpy?) blades didn't significantly hurt the performance of the turbine during stronger tides either. One thing the design has going for it, they say, is its simplicity. In the rough-and-tumble marine environments, mechanical complexity disfavors durability.

The best smart rings that are actually reliable