When you think Toshiba, you think notebooks (and TVs), but the company is also doing a thriving line in accessories. Its Dynadock U10 universal docking station is already the best-selling USB docking station on the market, says Toshiba storage business manager Graeme Simons (especially in the public sector where purchasing switches between different notebook brands and models frequently, so dedicated docking stations just don’t work). The U10’s cut-down baby brother, the V10 is half the size with many of the same features. It still uses DisplayLink’s chipset so one USB connection from your laptop transfers signals from multiple ports and devices – and only having one cable to unplug is a lot more convenient. 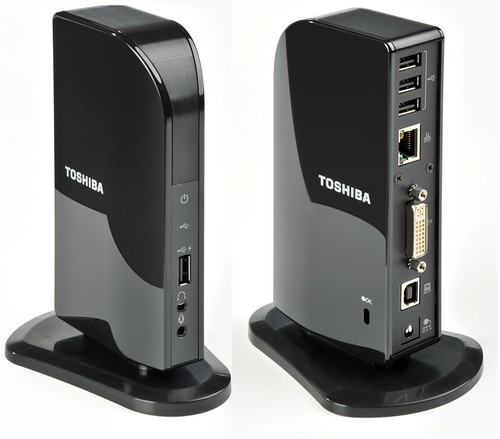 The £94 V10 has four USB ports (rather than 6), 100Mbps Ethernet, headphone and microphone sockets and a 1920 x 1080 DVI port (with a VGA adapter) that Simons says can drive two screens – and that’s enough for 108p video. At this price, the V10 should sell very well when it comes to the market in April.

Microsoft has its three screen strategy (PC, phone, TV plus cloud); Toshiba talks about two screens – PC and TV. That’s not just because it makes TVs and notebooks; it does actually have ways of connecting them. One is putting an interface on new TVs that lets you do the Windows 7 Play To thing in reverse, so instead of telling Windows Media Player to send your video or photo to the TV you use the remote control to browse through the video, photos and music on your PC. Another is adding multitouch overlays to TVs so you can use them for interactive presentations. And the newest idea is a ‘multimedia hard drive’ that you stick on your network and plug into a TV. 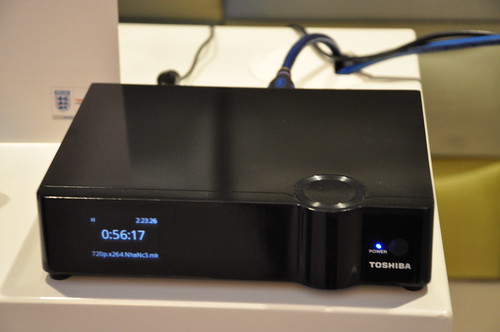 The StoreE TV+ will be on the market in Q2 or Q3 with a 1.5 or 2TB hard drive in, HDMI to connect to your TV, plus an SD socket and both USB host and device ports for connecting a hard drive or using the StorE as a drive on another device. There’s also an Ethernet port and built-in Wi-Fi; that means you can transfer video from your PC to watch on TV. 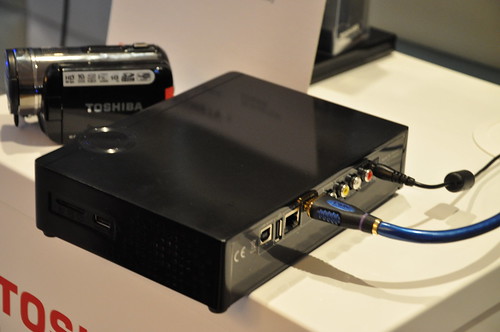 Currently it supports 720p HD video and 1920 by 1080; Toshiba says the specification is “about 90% done” so that could change. There will be a “whole host” of codecs; again the list isn’t finalised. And the StorE TV+ will support DRM because, as Simons says, “What we're not encouraging is piracy. There’s stuff on the PC that we think people will want to move to TV to watch it.”

Those same large drives are going into the portable StorE range too; 1.5TB is the most popular capacity at the moment for 3.5” drives but Simons expects that to change to 2TB, with the ‘sweet spot’ for 2.5” drives moving from 220GB to 500GB – and a 1TB 2.5” drive reaching the market at the end of Q3. He didn’t want to predict the price; “Pricing on hard drives changes a lot,” he joked, “but it never goes up.”

In Q2 Toshiba will have a vertically mounted 3.5” drive with up to 2TB of storage, with eSATA ports as well as USB; it will have a new name as well, though this isn’t decided. USB 3 drives might arrive in Q3 if Toshiba introduces USB 3 on its notebooks then, although product manager Ken Chan told us that with the advent of Intel’s LightPeak optical connectors he’s not sure USB 3 will take off so he’s making no promises.

Simons also noted that the best-selling StorE drives aren’t the cheapest models, but either the sleek and shiny metallic StorE drives or the StorE Art drives which cost about £5 more but come with backup software.