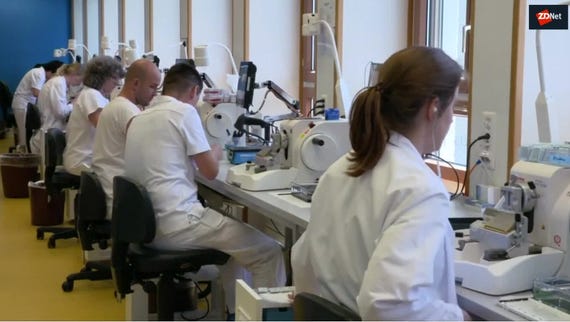 Starmind: True AI does not exist yet
Watch Now

Artificial intelligence is stuck today because companies are likening the human brain to a computer, according to Swiss neuroscientist and co-founder of Starmind Pascal Kaufmann. However, the brain does not process information, retrieve knowledge, or store memories like a computer does.

When companies claim to be using AI to power "the next generation" of their products, what they are unknowingly referring to is the intersection of big data, analytics, and automation, Kaufmann told ZDNet.

"Today, so called AI is often just the human intelligence of programmers condensed into source code," said Kaufmann, who worked on cyborgs previously at DARPA.

"We shouldn't need 300 million pictures of cats to be able to say whether something is a cat, cow, or dog. Intelligence is not related to big data; it's related to small data. If you can look at a cat, extract the principles of a cat like children do, then forever understand what a cat is, that's intelligence."

He even said that it's not "true AI" that led to AlphaGo -- a creation of Google subsidiary DeepMind -- mastering what is revered as the world's most demanding strategy game, Go.

The technology behind AlphaGo was able to look at 10 to 20 potential future moves and lay out the highest statistics for success, Kaufmann said, and so the test was one of rule-based strategy rather than artificial intelligence.

The ability for a machine to strategise outside the context of a rule-based game would reflect true AI, according to Kaufmann, who believes that AI will cheat without being programmed not to do so.

Additionally, the ability to automate human behaviour or labour is not necessarily a reflection of machines getting smarter, Kaufmann insisted.

"Take a pump, for example. Instead of collecting water from the river, you can just use a pump. But that is not artificial intelligence; it is the automation of manual work ... Human-level AI would be able to apply insights to new situations," Kaufmann added.

While Facebook's plans to build a brain-computer interface and Elon Musk's plans to merge the human brain with AI have left people wondering how close we are to developing true AI, Kaufmann believes the "brain code" needs to be cracked before we can really advance the field. He said this can only be achieved through neuroscientific research.

Earlier this year, founder of DeepMind Demis Hassabis communicated a similar sentiment in a paper, saying the fields of AI and neuroscience need to be reconnected, and that it's only by understanding natural intelligence that we can develop the artificial kind.

"Many companies are investing their resources in building faster computers ... we need to focus more on [figuring out] the principles of the brain, understand how it works ... rather than just copy/paste information," Kaufmann said.

Kaufmann admitted he doesn't have all the answers, but finds it "interesting" that high-profile entrepreneurs such as Musk and Mark Zuckerberg, none of whom have AI or neuroscience backgrounds, have such strong and opposing views on AI.

Musk and Zuckerberg slung mud at each other in July, with the former warning of "evil AI" destroying humankind if not properly monitored and regulated, while the latter spoke optimistically about AI contributing to the greater good, such as diagnosing diseases before they become fatal.

"One is an AI alarmist and the other makes AI look charming ... AI, like any other technology, can be used for good or used for bad," said Kaufmann, who believes AI needs to be assessed objectively.

In the interim, Kaufmann believes systems need to be designed so that humans and machines can work together, not against each other. For example, Kaufmann envisions a future where humans wear smart lenses -- comparable to the Google Glass -- that act as "the third half of the brain" and pull up relevant information based on conversations they are having.

"Humans don't need to learn stuff like which Roman killed the other Roman ... humans just need to be able to ask the right questions," he said.

"The key difference between human and machine is the ability to ask questions. Machines are more for solutions."

Kaufmann admitted, however, that humans don't know how to ask the right questions a lot of the time, because we are taught to remember facts in school, and those who remember the most facts are the ones who receive the best grades.

He believes humans need to be educated to ask the right questions, adding that the question is 50 percent of the solution. The right questions will not only allow humans to understand the principles of the brain and develop true AI, but will also keep us relevant even when AI systems proliferate, according to Kaufmann.

If we want to slow down job loss, AI systems need to be designed so that humans are at the centre of it, Kaufmann said.

"While many companies want to fully automate human work, we at Starmind want to build a symbiosis between humans and machines. We want to enhance human intelligence. If humans don't embrace the latest technology, they will become irrelevant," he added.

The company claims its self-learning system autonomously connects and maps the internal know-how of large groups of people, allowing employees to tap into their organisation's knowledge base or "corporate brain" when they have queries.

Starmind is integrated into existing communication channels -- such as Skype for Business or a corporate browser -- eliminating the need to change employee behaviour, Kaufmann said.

Questions typed in the question window are answered instantly if an expert's answer is already stored in Starmind, and new questions are automatically routed to the right expert within the organisation, based on skills, availability patterns, and willingness to share know-how. All answers enhance the corporate knowledge base.

"Our vision is if you connect thousands of human brains in a smart way, you can outsmart any machine," Kaufmann said.

On how this is different to asking a search engine a question, Kaufmann said Google is basically "a big data machine" and mines answers to questions that have been already asked, but is not able to answer brand new questions.

"The future of Starmind is we actually anticipate questions before they're even asked because we know so much about the employee. For example, we can say if you are a new hire and you consume a certain piece of content, there will be a 90 percent probability that you will ask the following three questions within the next three minutes and so here are the solutions."

Starmind is being currently used across more than 40 countries by organisations such as Accenture, Bayer, Nestlé, and Telefonica Deutschland.

While Kaufmann thinks it is important at this point in time to enhance human intelligence rather than replicate it artificially, he does believe AI will eventually substitute humans in the workplace. But unlike the grim picture painted by critics, he doesn't think it's a bad thing.

"Why do humans need to work at all? I look forward to all my leisure time. I do not need to work in order to feel like a human," Kaufmann said.

When asked how people would make money and sustain themselves, Kaufmann said society does not need to be ruled by money.

Additionally, if humans had continuous access to intelligent machines, Kaufmann said "the acceleration of human development will pick up" and "it will give rise to new species".

"AI is the ultimate tool for human advancement," he firmly stated.

Join Discussion for: True AI cannot be developed until the 'brain...