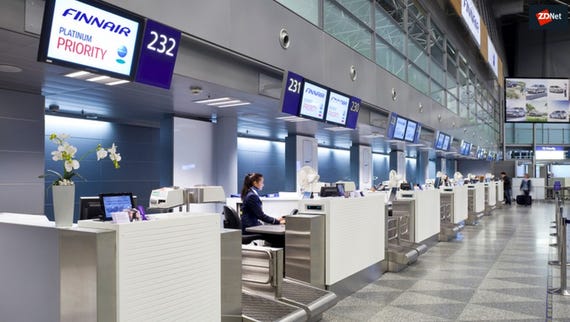 Is your face the only thing you need to board a plane?
Watch Now

Video: Is your face the only thing you need to board a plane?

You're right. That 'electronic Muslim ban' makes no sense US officials were than forthcoming about any threat, which only hurts public trust.

LONDON, UK -- The latest wave of airport security changes imposed by the Trump administration may point towards tight airline security measures which, while in place today for a handful of countries, will transform air travel as most passengers know it today.

In case you missed it, US Homeland Security Secretary John Kelly announced last week a new policy of tougher airline screening and checks for passengers attempting to reach the United States.

Airlines have just a few weeks to roll out the changes.

It comes not long after the Trump administration introduced a ban on large electronic devices in aircraft cabins.

We're used to having our laptops and smartphones to entertain us. Everyone from business travelers who want to work on flights to parents with young children that need entertaining were far from impressed with the seemingly nonsensical decree.

But the US said the changes were necessary as intelligence indicated that terrorists were "smuggling explosive devices in various consumer items."

Now it seems there is now some backtracking. Should new measures be implemented, airlines on the restricted list can earn their place off of the electronics ban.

With the looming changes in the US, look no further than Israel -- long seen as the nation with the toughest and strictest airport security that to the untrained traveler can be downright punishing.

Given the constant political and military tension in the region, it's no surprise that Israel has the toughest airport security and immigration checks, likely by far in the world. Anyone with a modest grasp of the country's fraught history and difficulties will sympathize. In any case, "their country, their rules."

The reality is that you only have to spend a typical day with any Israeli airline to get an insight into what could soon be the norm reaching the United States.

Several years ago I was invited on a press trip to tour some of the country, visit the Ben-Gurion University and the Negev desert's wineries. I was warned that I should leave three hours for security at London Heathrow rather than the standard two hours before boarding. (I flew with El Al, a popular Israeli airline, which has its own dedicated security line.)

Granted, this is only my account. Israeli nationals are able to sail through El Al's security with no qualms.

Three hours ahead of my flight I arrive at Heathrow and find the El Al check-in desk. At the first checkpoint, I am greeted by an imposing security guard who, on seeing that I am on my own, immediately fires question after question concerning my reason for travel, my plans, who I knew out there, and why I was traveling.

Blissfully naive about the level of scrutiny I was facing, I hadn't memorized my itinerary for the week-long trip -- far from it -- and I stuttered through the questioning, my eyes watering as he fixed his eyes on my face and did not blink.

While some passengers waltzed through, I was held in the steely gaze of someone who reminded me of an army staff sergeant barking at a quivering new recruit for over 15 minutes.

Some questions I couldn't answer, such as the telephone number of my sponsor or exactly where and when I was going to be throughout the week. As he thumbed my passport with suspicion, taking a moment to nod at a colleague behind him while narrowing his eyes at me when I offered to get out my printed itinerary for his use, a core of dread formed in my stomach in the fear that I wasn't going anywhere.

Eventually, with a grunt, he let me through, but I was aware that his colleague was tailing me as I walked towards the next checkpoint.

Before I'd even reached the bag drop, however, a female airline employee appeared out of nowhere, swooped on me, and demanded I hold still. Incredulous, I froze in my place as my boots and jacket were swabbed and checked for explosive residue.

And then came the bag check. Now forewarned of the general attitude towards security, I did not refuse when I was asked to move far to the side to be watched while my bag was peeled apart and each electronic item diligently swabbed, scanned, and swabbed again for any sign of explosives, drugs, or other contraband. (Some household items, such as cleaning fluids, contain chemicals used in homemade explosives.)

As my bag was checked -- a process which took far, far longer than other airports -- I handed over my cabin luggage and passport for the same scrutiny. I was once again carted off for questioning, to a pristine, glaringly white investigation room.

This time, I was a little more prepared for the interrogation (although I frankly expected a strip search considering how much scrutiny I appeared to be under). I fenced questions that were the same but asked in different ways with little time to answer. The El Al security employee eventually released me to pick up my items after a thorough pat-down and another swab session.

I began to inch closer to airside, but before I had gone further than a few meters, to my exasperation, I was collared once more, a sniffer dog smacking against my legs. I was swabbed and patted down yet again, and eventually crept airside to the nearest bar, nervous sweat beading on my forehead and trickling down my neck.

After a quick beer to steady myself and in the knowledge that this wasn't likely the end of the oppressive, suspicious behavior of security, I waited for my flight.

Boarding wasn't easy, either -- I was pulled into another investigation room just before I reached the cabin door for the same round of questioning I'd endured before, and although I'd scanned my itinerary in the bar in preparation for such an event, I still only just managed to board in time.

And there was more. It turns out getting out of the country was almost as difficult.

Security was chaos, and four hours in of answering the same questions over and over again, the penetrating stares and finally the fling of all my possessions on the security check stand -- including the casual launch of my pride-and-joy DSLR camera across the top to crash and spin -- I finally lost control and ended up in tears. I was close to missing my flight home and far from passing through to airside.

Eventually, an El Al security employee, standing next to the colleague that threw my camera around, took pity on me and ushered me through.

When I asked one of my Israeli sponsors, he shifted uncomfortably and admitted that I fit the profile of a "terrorist's girlfriend". In other words, as a white, single female flying to Israel, I fit the profile of a girl who may try to board a plane with explosives in order to commit an attack, or perhaps, attempt to smuggle such things into the country.

Another girl from a previous trip had arrived in Israel a few years past, eyes flooded with tears and clutching her possessions -- in a cardboard box -- to her chest after her suitcase had been confiscated and ripped apart in the quest for contraband.

The Trump administration has ordered its Homeland Security department to compel airlines to conduct "enhanced screening of passengers and devices," more explosives checks, more sniffer dogs, and the creation of more interrogation rooms, all of which were part-and-parcel of El Al in this case.

As a passenger who was already not an Israeli citizen, subject to suspicion for traveling on my own, and someone who fit a "profile" of a potential threat, it's not unrealistic to expect airline travel to the US becoming more "guilty until proven innocent" at the border, increasing both frustration and delays for passengers.

The US is demanding new security measures for roughly 2,000 flights from 280 airports in 105 countries in the next three weeks, although airlines will be given 120 days to fully implement the enhanced screening.

Now, this is not to say that the US changes on the horizon will be quite so painful. Airlines also have an incredibly short deadline to make these changes, and so will likely adopt an approach which is just enough to placate US officials, but no further.

But if the administration is willing to kick the economy in the shin hard enough to upset business travelers and make them rethink their plans to visit the country -- not to mention endure the fury of airlines with impacted revenue and the annoyance of general passengers -- who knows how far this will go?