Updated Android Gmail app gets a divorce from the OS

The Android Gmail app is now available as a direct download rather than being tied to full system updates.
Written by Christopher Dawson, Contributor on Sept. 22, 2010

Google announced yesterday on its mobile blog that it was releasing Version 2.3 of it Gmail application for Android directly into the Android Market. In the past, the Gmail application was tied directly to the Android operating system, requiring full OS upgrades to access updated features. Given that carriers and equipment manufacturers have struggled so much to keep up with Android releases, this marks an important step forward for one of Google's core properties.

It also means that Google is quickly getting ready for a more tablet-oriented Android release (version 3.0) where Gmail functionality can clearly be enhanced and differentiated from that available on a mobile handset. While the actual enhancements in Version 2.3 aren't exactly revolutionary, the divorce from the OS (Google calls it "decoupling") is far more interesting in terms of the future of Android and user's ability to access updates and fixes to applications.

According to Google's announcement,

Now you can get new Gmail stuff faster without having to wait for system updates. To start you off, we’ve improved message replies, access to quoted text, and more.

As you scroll through a conversation, your most important message actions will now stick to the top of the screen, one click away, no matter how long the email is...this updated version of the Gmail app [also] has limited support for Priority Inbox. If you’ve enabled Priority Inbox via the desktop version of Gmail, you’ll see an “Important” label that shows all messages flagged as important. You can even add a shortcut to “Important” to your home screen.

As I said, evolutionary from a UI perspective. Here's a shot of the new message view: 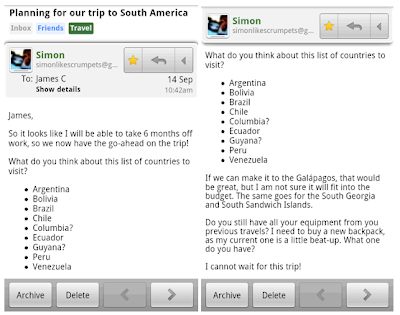 Check your "Go to labels" menu item to see the Priority Inbox features.

Ironically, while this update ends the marriage of the Gmail app and the OS, only users running Android 2.2 can access the app in the Android Market. Again, this is an important step looking forward, but is a major source of trouble for those users stuck at earlier versions of Android. In fact, only about a quarter of Android users are up to Froyo, leaving the rest behind with outdated Gmail applications.

What was that about fragmentation of the Android platform?

If you're lucky enough to be running Android 2.2, then you can just scan the QR code below:

If not...well...tough. Guess it's time for a new phone. Or so the device manufacturers and carriers would love to have you believe.