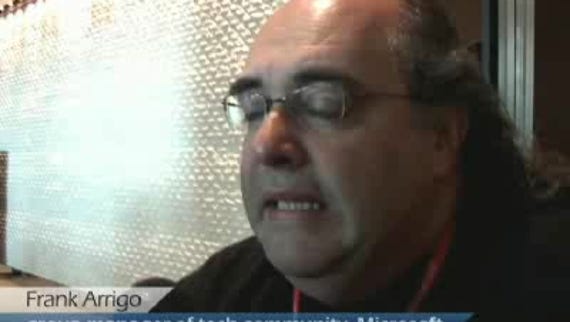 Microsoft has learned some very serious lessons when it comes to complying with web standards after taking heavy criticism from the industry and, more importantly, a beating in the browser market share.

In a video interview last month, Microsoft blogger and group manager of technical community, Frank Arrigo, explained how important it is for the Redmond giant to follow web standards.

In July 2003, IE owned more than 90 percent of the browser market and very few companies even bothered testing their web applications against anything other than Microsoft's (non-standards compliant) browser.

In that position of power, Microsoft announced that IE would no longer be released as a standalone browser and instead would be available only as part of the next desktop operating system — at that time known only by the code-name Longhorn, but since released as Windows Vista.

In response to the announcement, analysts such as Gartner's Michael Silver warned that Microsoft's decision was likely to create opportunities for alternative browsers.

"People will think, 'are the applications I'm writing for the browser-agnostic, or are they IE applications — which makes them Windows applications?' If I want an application to run on a Linux desktop or Macintosh desktop, maybe the way to do that is to ensure it runs on Mozilla, Safari and the other main browsers," Silver said.

This was also the view of James Governor, an analyst at RedMonk. Governor said: "The bottom line is that consumer-facing websites have been remiss in supporting the latest standards, and unresponsive to the needs of many users. It's time to reassess that approach, and Microsoft's decision is a good spur to doing just that."

Facing fresh challenges
Four years on, Microsoft still has the dominant browser, but its market share has plummeted. Firefox and Opera, which are standards-compliant, have made amazing progress and Apple is also hoping to have an impact with its Windows-based Safari offering.

Microsoft is now facing a new challenge — in the world of Web 2.0, the company's Expression Web design tools, along with Silverlight, have been touted by some as potential "Adobe Flash Killers".

However, this time around Microsoft is preaching the use of standards.

At Remix, Microsoft's Arrigo said: "Expression Web is about being a standards-compliant tool because we want to make sure our tools are used by people that are embracing the standards".

When asked if it could be a "Flash killer", he said: "At the end of the day, the customers are going to decide. People who are making applications are going to make a decision. At least we have got something in this genre now".

It seems that Microsoft has learned a very big lesson and this time, it will be the quality of the software rather than an attempted abuse of market power that will decide the winner.