I have recently used the ViewComm iSpace 2 portable 360 degree projector when I have been out and about with clients, and I received very good feedback on its futuristic design. It is compact and easy to use -- and it will run on batteries.

Newly launched on Kickstarter this week, the projector has a circular body on a tripod with an adjustable angle. It's reminiscent of an upside-down Starship Enterprise, and that is cool enough. But the iSpace 2 has some other neat features too.

This is a compact projector that will go anywhere. Its dimensions are 130mm in diameter, 42mm in height, and 425g in weight.

Inside the well-labelled compartmentalised box, there is the projector, a USB-type C charging cable, a remote control, a tripod stand, a power adapter, and four silicone pads to fix onto the bottom of the projector to stop it sliding across the desk.

There is also a user manual that has minimal instructions and could be a lot better. It does still have a clear description of all of the ports on the unit.

The lens and focus wheel are hidden behind a guard, as are the HDMI, USB-type C, and 12V DV ports. To access them, rotate the cover of the unit by 90 degrees to slide the covers out of the way. 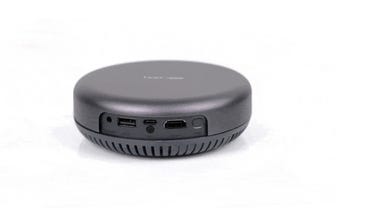 The UI is simple to use and you can connect to the iSpace 2 using either Wi-Fi or Bluetooth -- or simply use the provided USB type C cable to project from your device.

You can also project using an HDMI cable, but this is not provided in the box, so you will need to buy your own.

The iSpace 2 will project from 80 to 200 inches at a maximum of 5m distance from the screen. Its resolution is good at 1080p with 854 x 480px, and lag when playing movies or games is minimal.

You can tweak the image mode to optimise the image for movies and games or leave it on the standard settings. You can also tweak brightness, contrast, saturation, sharpness, or colour temperature to get the settings you prefer.

The projector will deliver up to 250 ANSI lumens and brightness is similar whether the unit is on mains power – or running on battery - a useful feature.

The LED lamp will deliver up to 30,000 hours of running time. The file storage system has 8GB of file storage and 1GB RAM which is reserved for the system itself. its 4,500mAh battery will project for hours before it needs to be recharged.

I left it running on battery for over two hours playing a movie before I needed to plug it into the mains power. I suspect that I could have used it for longer. Running on Bluetooth, playing music only, and not projecting, I got well over 8 hours of playing time at moderate volume.

Sound is provided via 2 x 3W speakers which give reasonable sound across all ranges. Spoken words are nice and clear, and mid and high levels are clear without sounding tinny.

The bass is not as deep and rich as some booming Bluetooth speakers – but perfectly adequate for 3W speakers. You can always connect an external Bluetooth speaker to the unit to get the bass you want.

The iSpace 2 also has an adjustable Aluminium tripod with a magnetic pad to attach to the projector itself. The tripod head will swivel 360 degrees and will tilt to 90 degrees, so there is no propping the projector up on books to project onto the screen.

Inside the iSpace 2 projector, there is a MediaTek MTK 9255 chipset with a dynamic contrast ratio delivering up to 450:1. It also has automatic horizontal and vertical +/-40 degree 4-point keystone correction software.

Move the projector slightly to see the keystone adjust itself. You can also adjust the keystone manually if you prefer.

If you want to use your mobile phone to control the projector, download the Eshare app from the app store. You can then mirror your screen or push the content through the type C cable.

To switch from Bluetooth to projection, simply rotate the projector cover. The light will come on after about one second and you can start to project.

To return to Bluetooth, rotate the screen again. The iSpace 2 projector is simple to configure and use, and very portable. It can be used as a backup projector if your main projector fails for some reason – a must if you do not have much luck with projectors.

All in all, this purse-sized projector can go anywhere with you and get you out of a tricky situation if you need a projector in a hurry. Use it on mains power – or battery - and rest assured that its simple-to-use controls will mean that anyone will be able to use it.

For under $200 the ViewComm iSpace 2 portable projector bundle is certainly worth checking out on Kickstarter. Nab yourself an early bird deal on a really useful projector. Grab it while you can.