Full Bio
Posted in Between the Lines on January 28, 2014 | Topic: Mobility

Vodafone shareholders on Tuesday voted to OK a deal that will see the U.K. cell carrier sell its 45 percent stake in Verizon Wireless, giving Verizon full control of its cellular business. 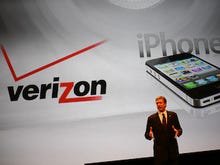 First reported by The Wall Street Journal, the deal — made up of $119 billion-worth of cash and stock — will return up to $84 billion, or 71 percent of net proceeds, back to Vodafone shareholders.

It's the second largest deal ever made after Vodafone's acquisition of German-based firm Mannesmann in 1999, and the largest single return in corporate history, according to the Journal.

Verizon Wireless, which as of its fiscal fourth quarter earnings has almost 103 million customers in the country.

Verizon chief executive Lowell McAdam  said at the time  the buyout will "enhance value across platforms and allow Verizon to operate more efficiently," and "will provide increased opportunities in the enterprise and consumer wireline markets."

For the past four years, Verizon has wanted to buy back Vodafone's near-half stake in the Verizon's wireless business, which remains the most profitable part of the company since overtaking its wireline business in 2008.

Vodafone paid $70 billion in 1999 for what eventually became its share in Verizon Wireless. The U.K. phone giant however had restricted control over its operations.

Questions remain over exactly what Vodafone will do with its newfound chunk of financial wealth. Based on its first quarter earnings, sales were up by more than 2 percent, but suffered in Northern and Central Europe from heavy competition in the region.

Might be a good idea to reinvest in that area, considering Vodafone's reach in the U.K. is big enough, but Europe-wide is seeing increase pressure from rival carriers.