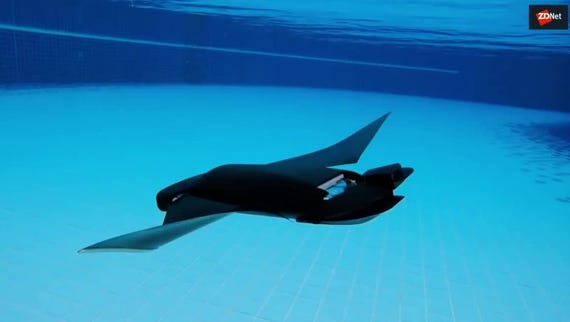 Manta rays fly through the water on specially adapted wings. It's a hyper-efficient mode of undersea transportation that also affords the animals agility and speed.

Engineers at the National University of Singapore just released video of a project two years in the making: An autonomous underwater vehicle that mimics the manta ray's locomotion with graceful precision.

The light weigh is a testament to the drone's efficiency. It can achieve long run times without requiring a heavy battery payload.

MantaDroid is also unique among underwater flyers for its engineering simplicity.

"Unlike other flapping-based underwater robots that replicate manta ray flapping kinematics by using multiple motors to achieve active actuations throughout the fins, MantaDroid is powered by only one electric motor on each fin," says Associate Professor Chew Chee Meng, who worked on the project. "We then let the passive flexibility of the fins interact naturally with the fluid dynamics of the water to propel the subsequent motions."

Unlike undersea drones that use propellers, the National University of Singapore project is nearly silent. That makes it much more useful in environments where there may be sensitive sea life.

Undersea drones have a variety of applications, from inspecting undersea infrastructure to taking pollution readings in areas that are difficult for humans to access, such as spill sites.