We can all be manufacturers

Chris Anderson, best known a big thinker and an author that chronicles the digital revolution, is going decidedly analog.
Written by Larry Dignan, Contributor on Dec. 1, 2009

Chris Anderson, best known a big thinker and an author that chronicles the digital revolution, is going decidedly analog. 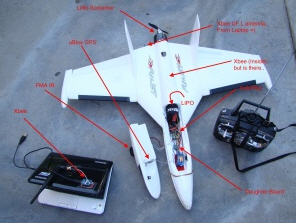 San Francisco. I must admit it’s odd to hear Anderson get so wound up about physical stuff. But he got into manufacturing—without any infrastructure mind you—via his DIY Drones venture (right). “This could be the future of manufacturing and the future of the U.S. economy,” he said.

Anderson’s speech, which he used to try out new material that will most likely wind up in another book, made the following points:

The list goes on. Anderson’s big point is that the barriers to manufacturing are falling away. In fact, we may all be manufacturers down the road. Consider it the long tail of physical stuff.

Related: Free is not a business model

Freemium: The first business model of the 21st century