What does Google know about you? Its new privacy dashboard should reveal all

The new mobile-friendly version of Google Dashboard is rolling out this week.
Written by Liam Tung, Contributor on Sept. 11, 2017 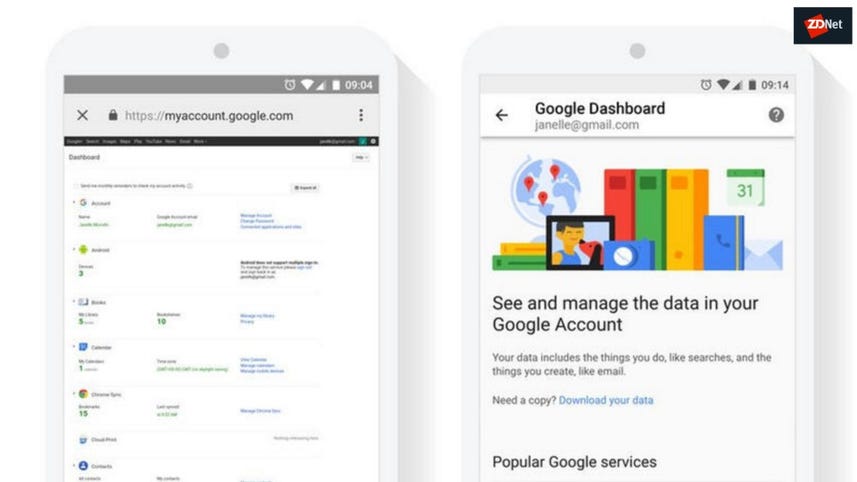 Google is rolling out an update to the Google dashboard with new features and a redesign aimed at making it easier to use on mobile.

The Dashboard is the place where Google shows users a snapshot of the Google services they use and what data it's collecting, such as Maps location history, photos stored, search history, and YouTube history.

Dashboard launched in 2009, but until now, it hasn't had a mobile version, making it difficult to use. The current page, designed for the desktop, is shown above on the left and contains a lot of small text and links -- with no obvious way to download data that Google has collected.

The new page in the right-hand image has larger logos for Google products, prioritizes popular products, and offers a link at the top of the page from where users can download all their data.

Previously, the link to Google's Takeout site, where users could download their data, was available in My Account, not the dashboard.

Google said it wanted to integrate Dashboard better with its tools like My Account and My Activity.

The redesign is also meant to make it easier to get an overview of Google products used and personal data in each of them. The most important part of the redesign was to "improve usability on touchscreens," Google said in a blogpost.

The company is rolling out the redesigned Dashboard in the coming days.

The Takeout download feature launched in 2011, and since then, Google said people have downloaded over one exabyte -- or a billion gigabytes -- of data from the service.

Google's billion-plus users are creating a million exports per month. Takeout currently supports exports directly to Microsoft OneDrive and Dropbox, and soon, Google will add Box and other options, too.

Google launched My Activity last year and claimed 150 million people have used it to find content they'd previously found through a Google search.

Keeping user in mind, Google released Dashboard, a page that gives users access to the privacy settings for all of their Google accounts.

Use Chrome extensions, apps? Google's privacy crackdown is about to make your personal data a lot safer