Why all that crapware will kill the PC

Turn on a brand new PC - like I did for my mother-in-law last weekend - and the first thing I do is close a popup from a security app. Then I close another popup from the same app.
Written by Simon Bisson, Contributor and  Mary Branscombe, Contributor on Aug. 13, 2010

Turn on a brand new PC - like I did for my mother-in-law last weekend - and the first thing I do is close a popup from a security app. Then I close another popup from the same app. Then there's probably a popup from a different security app; close that and then uninstall them. Then close the two alerts from the Java Updater; it's a 64-bit PC these days, so both 32 and 64-bit Java Updaters are running. (In most cases I'll uninstall Java because there are so few times that I use it and it's so hard to make the Updater go away and leave me alone; with two instances of the updater I can't always make them remember the setting to check for updates manually - if you actually use Java, you'll have to grit your teeth and accept the updates on both versions and then set the update check frequency you want. And why Java isn't a digitally signed application in this day and age, I do not understand.)

Then I'll download Microsoft Security Essentials to keep things protected while I get the updates from Windows Update (I'm still recommending replacing Norton and McAfee with Microsoft Security Essentials to get good protection without losing performance; I'd be interested to hear your recommendations); then install Live Essentials for Photo Gallery and prune off the variety of games, alternative front ends designed for children, video editing tools and other cruft that's filling the system up. Reboot to finish the cleanup, pick the browser of choice - and only then do I let the person I'm helping take a look at their new toy and start setting it up for themselves. And that way, they get to decide how they feel about Windows rather than how they feel about the mess the PC manufacturer has made of it. We shouldn't have to do this - not least because the average PC buyer would never realise they need to clean up a brand new PC.

Am I being unfair to PC makers here? Is Windows so perfect there's nothing they can do to improve on it by adding apps? Isn't it better to have antivirus and security software on there from the get go? Maybe, of course not and probably - but getting a new PC is still a far more frustrating experience than it should be - and a bad experience with a crapware-laden Windows install is going to push users into the arms of Mac and Android and iPad and Chrome faster than anything else. Microsoft does understand this; look at the clean and sparkling Windows images you get on the PCs at the Microsoft Stores (they're called signature images). There was a plan to segregate all of the pre-installed software added by the OEMs into a special OEM folder that I spotted on a presentation running in the breaks at the Windows 7 reviewer's workshop way back when - and that OEM folder finally showed up in the signature builds. And while the Windows 8 presentations that showed up online a while back have never been acknowledged to be legitimate, I'm inclined to believe in the graph that shows a PC with a retail copy of Windows 7 installed boots in two seconds less than an OEM copy. After all, taking the OEM software off the Sony VAIO X made it boot 30% faster and gave it a 50% longer battery life. 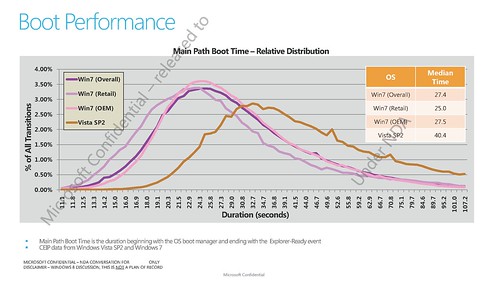 But many PC makers don't seem to have understood how important it is that the first-time-out-of-the-box experience for a new PC should be fast, sleek and shiny - not irritating and confusing.

The Java issue isn't the OEM's fault (Java is open source software so I can't legitimately blame Sun and Oracle) but the experience needs to be better and the PC OEMs are in a great position to push the folk behind Java to improve this if they want it to go on new PCs. The security software is on there by popular demand, and certainly the experience of uninstalling, say, Norton, is a lot better than it was even six months ago. But all the rest of the apps that are on the average new PC would be far better as a slideshow of software you could choose to install or delete from a single checklist that came up, say the second time you turned on the PC (on the VAIO X, Sony put them in a Device Stage window). You'd appreciate the ones you did want - and the people who want two months of free Office or a free copy of Office Starter won't be irritated by the apps for children and the people who want the apps for children won't be annoyed by having to take the time to get rid of Office.

Each of those apps is on there for a reason; a green and crinkly reason. The going rate for a pre-installed app is around $5, paid from the software developer who hopes you'll keep and pay for the full app - and that revenue keeps the prices of PCs with Windows down below the price of the same hardware with another OS. We all like cheap PCs. But if the first experience with a PC carries on being a bad experience, Windows is going to have a harder and harder time competing. If the PC makers don't care about that, Microsoft does - and it needs to care enough to lean on them to help the customer.

Because although I say Microsoft understands the problem, what it actually talks about is the rich ecosystem and all the added value the OEMs provide and how much choice there is and how the OEMs understand their customers. Some of that is perfectly true, but some of it has to be down to the complexities of the business relationship with the OEMs who are, as I say, their biggest customers. (The vast majority of copies of Windows are sold on new PCs, point out the Windows team, whenever you ask about something complicated in the upgrade process.)

Microsoft can’t just throw its weight around with the OEMs or the software developers who write the apps that come pre-installed on PCs; the years when Microsoft bullied other companies left it with a terrible legacy of distrust and unpopularity that better behaviour and better products haven't erased. Plus the PC OEMs are Microsoft's customers and if you look at the numbers they might look like more important customers than individual users. But the years that graphics drivers were blue screening Windows (and the way people still think that’s down to a fault in Windows rather than cruddy device drivers from graphics card manufacturers) have to be a huge hole in the Microsoft balance sheet too, and the sooner Microsoft puts its foot down and draws some lines in the sand for OEMs, the better Windows will look because of it.

I praise Microsoft every time they name and shame apps and add-ins that slow things down; did you know how much longer it takes to open a tab in IE 8 if you have the WinAmp toolbar? - and praising the software that gets it right is good too. Carrot or stick, technical advice or a spot in a keynote for a PC that boots faster (the VAIO X was shown off at the Professional Developers Conference last year); Microsoft has to find a way to push the industry towards a better user experience on PCs for everyone's sake.