It was a Suunto n3 based on Microsoft's Smart Personal Objects Technology (SPOT). It was $300 and you had to pay $10/month or $60/year for an MSN Direct service to pipe email, IM, calendar, and news alerts to your wrist. 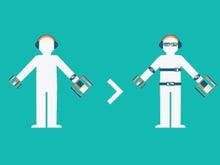 Wearables: Fit For Business? The explosion of interest in wearable computing is one of tech's fastest rising trends. While big moves from Google, Apple, and Samsung will likely attract a lot of attention, we're going to examine the broader potential that wearables hold for driving innovation in business.

It had a monochrome display and you couldn't interact with any of the information — it was all read-only. But, it was pretty heady stuff for the time. I wore it for two to three months, mostly because of the novelty factor and because I was a tech journalist trying to analyze it.

But once the coolness wore off, I eventually quit wearing it because most of what it offered was faster and easier to access on my Palm Treo 650 smartphone at the time. The Treo didn't have as much of a wow factor with my geeky friends. It didn't feel as cartoonishly futuristic. But, damn was it ever efficient.

Also, the Suunto was big and bulky and pretty hideous as a fashion statement — even though it was the best looking of that first crop of Microsoft smartwatches. So eventually, I just got tired of wearing that little monstrosity on my wrist.

Fast forward nine years and 2014 has obviously made smartwatches a thing again, now that Apple has entered the market. Over the past couple years, efforts from Sony, Samsung, LG, and plucky startups like Pebble have generated enough interest to be curious, but haven't turned smartwatches into something that everyday people want.

Much of the industry has been holding its breath for Apple to make its long-rumored entrance into wearable tech. The logic has been that if anyone could create a smartwatch with the kind of design and style that would appeal to the masses, it would be the company that brought us the iPod, iPhone, and the MacBook Air over the past decade and a half.

However, when Apple unveiled the Apple Watch at its big event in September, my first thought was "uninspiring" — as I posted on Twitter at the moment. While it impressed plenty of the tech press who have been dying for something new to write about, the timepiece concept that Apple showed off — it won't be available until early 2015 — was a thick, square gadget that still looked more like a geek's toy than something you'd see a parent in the Midwest or a teen in New York City walking around wearing. I especially couldn't imagine many women getting excited about it, since it was so large and masculine — even the smaller 38mm one, which feels like it might appeal to smaller men in Asia more than women worldwide.

In terms of what it can do, the Apple Watch, and the watches based on Android Wear, are lot more capable than that old Suunto n3. They actually offer beautiful color screens and even have some clever interactive features. But, for most people I still think all of today's smartwatches are destined to be little more than smartphone alert systems.

Initially, people might try to look up information or scroll through a few things on the smartwatch because it truly is such a novelty to have that much computing power strapped to your arm. And Apple has legitimately improved the idea of UI on a watch with its Digital Crown. But, I think we'll see people eventually just pulling out their smartphone to look something up because it's still going to be far more effective to tap and touch on a 5-inch screen than it is to swivel a Digital Crown on the 1.6-inch screen of an Apple Watch.

The one exception will probably be serious exercise junkies, who will be able to leave their phones in their bags and use the Apple Watch to track and interact with activity data. It's likely to be an amazing device and a true game-changer for them.

But, for most people, a big part of the appeal of a smartwatch will to be whether it goes with their dress or their jeans or their new fall sweater. Even Apple has struggled to design a watch with all the functionality that modern technology can bear, but that your dad and your niece would both want to wear.

The week after Apple unveiled its line of 21st century watches, I was at Disney World on a family vacation and I was thinking about whether I would buy an Apple Watch when it comes out. I rarely wear anything on my wrist anymore, but at Disney I used their new Magic Band all week. It can add a little something to sling an interesting thing around your wrist, so it opened me up to the idea of wearing a watch again.

However, when I remembered my experience with the Suunto n3 and realized that today's smartwatches are destined to be slightly fancier alert devices, I decided that it's unlikely I'll buy one. Symbolically, I bought a $10 rope bracelet at an African goods store in Disney's Animal Kingdom and put on my left wrist where I would have normally put a timepiece. I've had fun pointing at it and joking with friends over the past couple weeks saying, "Here's my new smartwatch."

Join Discussion for: Why I bought a $10 band instead of waiting...