Microsoft today confirmed what had been widely rumored for the past week: Windows 8.1 will be released to the general public in October. Specifically, "starting at 12:00am on October 18th in New Zealand (that’s 4:00am October 17th in Redmond), Windows 8.1 will begin rolling out worldwide as a free update for consumers on Windows 8 through the Windows Store."

Today's announcement indirectly confirms what my sources have also told me, which is that Windows 8.1 has been officially is in escrow, awaiting the final, formal designation that it's been released to manufacturing.

Update: A Microsoft spokesperson says Windows 8.1 has not yet been released to manufacturing. “Development of Windows 8.1 continues to be on track, and we expect to reach the RTM milestone and release Windows to our OEM partners in late August.”

In Microsoft’s partner-driven world, that’s an important milestone. It means the code is on its way to OEMs, who in turn can incorporate it into new hardware designs for shipment this fall. After a year of generally miserable Windows 8 sales, those OEMs could use some good news to drive holiday sales. 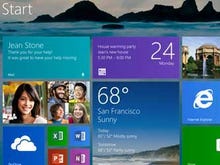 Windows 8.1 Enterprise Preview, hands on: Much more than a service pack

Windows 8.1 Enterprise builds on the consumer Windows 8.1 with a selection of additional enterprise tools. We took it for a spin around our network.

The most visible change in Windows 8.1 is the addition of a "boot to desktop" option, as well as significant changes to the Start screen and support for smaller form factors. (For A full list of changes, see "Windows 8.1 unveiled: will it change your mind about Windows 8?" )

Customers, though, are going to have to wait.

Why the lengthy delay (more than two months) between this milestone and General Availability? I’ve heard some conspiracy theories suggesting that this isn’t the real release and that Microsoft is still furiously swatting bugs between now and an October public release.

The actual reasons, I suspect, are more mundane:

First, hardware makers need time to tweak drivers and utilities for existing devices so that the upgrade process goes more smoothly. That’s crucial for devices that require firmware upgrades to work properly with the new code. On the Windows 8.1 Preview forums, I've read page after page of reports from frustrated Preview users who had either failed upgrades or problems with incompatible devices. OEMs can’t afford widespread issues for customers getting released code.

Second, Microsoft still has work to do on its first-party Windows 8 apps, especially the unified Windows communication suite that incorporates the Mail, People, and Calendar apps.

And finally, those few extra months allow time for some high-profile third-party developers to get on board with Windows 8 apps. Facebook, for example, is still missing in action on the platform.

There will also, of course, be fixes for the official Windows 8.1 code between now and October, released via Windows Update. But the update itself is locked down.

Join Discussion for: Windows 8.1 to launch in October