Canada and Mexico have become alternative development and delivery hubs for IT Services companies but they are simply band-aids for a more complex problem that requires a long-term, robust solution.
Written by Rajiv Rao, Contributor on May 30, 2019 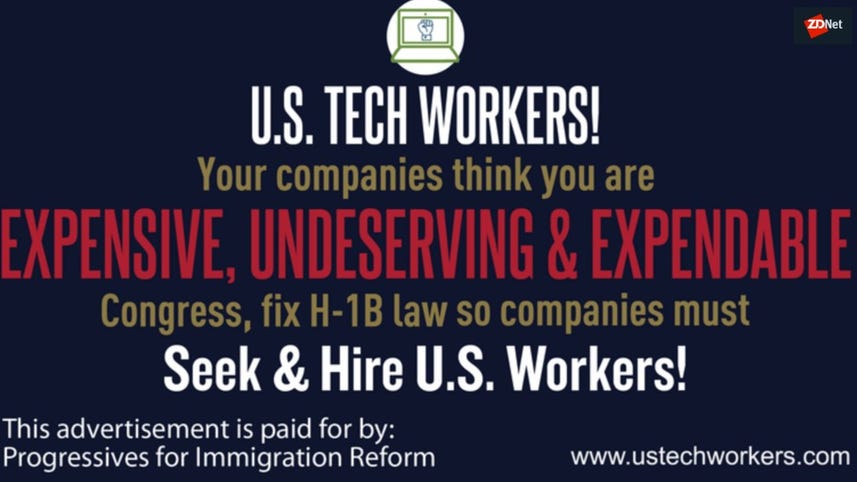 President Donald Trump's onslaught against the H-1B visa has had drastic effects on the business models of Indian IT firms.

Rejection rates for the top 6 companies (TCS, Wipro, Infosys, Tech Mahindra, Cognizant, and HCL Technologies) hovered around just 4% on average in 2015. However, between September 2018 and April 2019, that rate skyrocketed to 36%. Even global IT firms such as Accenture and Deloitte with built-in offshoring models have been hit for their reliance on H-1Bss.

Almost overnight, the redefinition of the criteria used to dole out H-1Bs, the hyper-scrutiny of candidates and their qualifications, and targeted site visits, all which have contributed to the dramatic reduction in visas to Indian origin firms and global US-origin ones have forced IT majors to grapple with how best to cater to their clients in the US (where 60% to 70% of their business comes from) in order to win business deals. One positive development for the US tech labour force is that it has forced IT firms to begin to actively train and recruit Americans. Almost all of them have started innovation centres and campuses and hired tens of thousands of candidates, making them one of the largest tech employers in the US.

But that still doesn't address the talent gap at the middle and senior levels. Quartz mentioned a report from Kotak Institutional Equities Research, which said that "entry-level talent is available but cannot be used for knowledge transfer phase or initiation of projects". In other words, mid to senior-level talent are needed to land deals, especially those who are seasoned engineer-consultants in 'design think' and can lead agile teams, but this is simply not available from the amount of talent that is currently allowed to work in the US.

One immediate stop-gap option is to hop across both borders to Canada and Mexico to leverage tech talent there -- by opening delivery centres in the form of a nearshoring model. For instance, Tech Mahindra announced it would set up a centre of excellence in Canada at an investment of CA$100 million. Similarly, mid-sized IT company Hexaware has said it would use its Mexico centre to service US clients.

Nearshoring isn't light on the company's operating expenditures, but it is the next best option to outsourcing from India. Plus, the TN visa -- for non-immigrant NAFTA professionals -- is a valuable tool with which companies can send employees to client sites. TN visas have no cap. They also have nowhere near the same amount of onerous demands that the H-1B does in terms of qualifying criteria.

There are limitations here though. "Even though nearshore centres give one proximity to the clients, there are limited advantages as they (engineers who are sent to the US from these centres on a business visa) are not allowed to render any profitable work in the US," said Hansa Iyengar, senior analyst at London-based Ovum Research. In other words, relying on a nearshoring model is not a feasible long-term solution to the current crisis.

Which means that, for now, IT firms that have relied on offshoring work and bringing in H-1Bs for project implementation will have to start looking at new ways of conducting business. Indeed, the slow demise of infrastructure maintenance and app development has given way to a digital future across Social, Mobile, Analytics, and Cloud (SMAC) that requires consultative chops and flexible, agile, and highly responsive teams to push IT in that direction anyway. Yet, the model still relies heavily on an offshore component for even leaders in this space, as Accenture has shown. The question is, for how long will IT's opex structure be able to support the soaring costs associated with such a high degree of H-1B rejections without compromising service delivery.

Veteran technology analyst Viju George of JP Morgan suggested in Mint newspaper that such risks will materialise if rejection rates for H-1B visa extensions approach 45%. At the pace that rejections are being doled out, George said the threshold level will be reached in less than two years, which, you would imagine, is a dire enough prognostication to get those panic buttons flashing.

Meanwhile, IT firms will have to work furiously to develop other ways of servicing clients that dispense with a reliance on H-1Bs altogether.

What's in a name? These DevOps tools come with strange backstories