Need to type on an iPad or Galaxy Tab? The ZAGGfolio gives you a Bluetooth keyboard and a sturdy but lightweight protective case, turning your tablet into more of a netbook.
Written by First Take , Previews blog log-in on March 27, 2012

Need to type on an iPad or Galaxy Tab? The ZAGGfolio gives you a Bluetooth keyboard and a sturdy but lightweight protective case, turning your tablet into more of a netbook.

The outer case has rounded edges and a stylish woven carbon fibre finish over the ABS hard shell. This gives you plenty of grip, and the microfibre lining won't scratch your tablet as you're sliding it in and out. The keyboard slides out of the case should you want to remove it — irritatingly, you also have to slide it out a couple of centimetres or so to plug in the Micro-USB-to-USB cable for charging, but at least that keeps grit and dirt out of the port and the charge should last several weeks. Your tablet snaps into place in the top half. 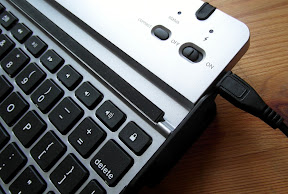 The keyboard and tablet fit neatly into the ZAGGfolio case, but you have to pull them out to charge it

The ZAGGfolio was originally designed to fit the iPad 2 snugly. That made it a tight fit for the new iPad, so ZAGG has redesigned the new version to fit both models. There's also a version that specifically fits the Galaxy Tab 10.1, with dedicated keys for Android rather than iOS functions.

When you open the case, the lower third of the lid folds out as a hinge and the lower edge of the tablet lifts up and sits in a groove with a lip at the front. The projecting corners of the back of the case perch on the desk, which is enough to keep it stable on most surfaces — although it's not always ideal to have on your lap. If you want to flip your iPad round into tablet mode, you take it out of the case and balance it in the groove. You can either ignore the case at this point, or fold it back under the keyboard to put it at an angle. The case is sturdy enough for you to do this repeatedly without worrying about it cracking or tearing apart. 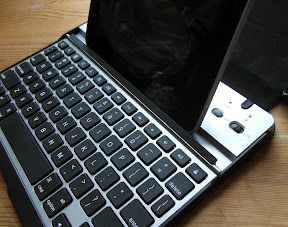 You can balance any slim tablet on the ZAGGfolio in portrait orientation, but the PlayBook is too thick to perch in the slot

The keys are a good size, well spaced and comfortable to type on, with excellent travel. It's a US layout though, with the @ and " keys reversed and # instead of £. It's nice to see arrow keys, even though tablets have touchscreens, because moving back a couple of letters in a word is faster to do on a physical keyboard. You also get a row of special keys for things like copy and paste (which don't have keyboard shortcuts on tablets the way they do on a PC or Mac) as well as controlling volume and media playback. The Galaxy Tab version of the ZAGGfolio also has the Android home, back and search keys, as well as brightness controls and an Escape key. The iPad version has home and search as well, plus buttons to open a photo slideshow, lock the screen, bring up the virtual keyboard and switch between International keyboards.

If an iPad or Galaxy Tab isn't the only device you use, the ZAGGfolio works with other devices too — it paired perfectly with a Windows 8 tablet for example, and the command key works as the Windows key. Some of the key mappings with Windows are unexpected; the copy and paste buttons helpfully bring up the Charms bar and the handy desktop menu of admin tools. Some of the special keys don't match anything in Windows and there's no right mouse key, but the volume keys, the media control keys and the browser launch button all work as well. (The Galaxy Tab version has an Esc key as well). You wouldn't buy this as a Bluetooth Windows keyboard, but it's useful to have it work well if you want to share it between devices.

Other tablets won't fit in the folio case, and sadly both the Samsung Series 7 tablet and the BlackBerry PlayBook are too thick to even balance in the slot at the back of the keyboard. So ZAGG has another keyboard on the way, the ZAGGkeys Flex, which isn't as deep because it doesn't have the space behind the keybaord for the groove. Instead it has a wraparound case that unfolds like a piece of origami on which to prop up the tablet. It will even have a switch to let you change the special function keys from iPad to Android mappings. It won't turn other tablets into a neat little notebook the way the ZAGGfolio does, so if you need a keyboard often enough to want to carry it all the time, iPad and Galaxy Tab users are better off.

The best iPad Pro keyboard cases: Turn your tablet into a laptop

Protect your tablet: The best iPad Pro cases you can buy