China Mobile International has begun construction plans for a new data centre in Singapore, its second built-up facility in Asia-Pacific, which will support its global network. 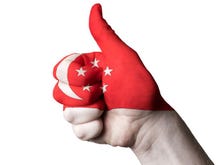 MyRepublic not late to Singapore mobile market, but must differentiate with customer service Some 18 months after losing its bid for the country's fourth telco license, MyRepublic finally launches its mobile services and hopes to gain ground by offering subscribers more control of their service plans.

Located in Singapore Dacheng Industrial Park, the site spanned a gross area of 7,330 square metres and a construction area of 15,174 square metres. It would house 2,100 racks, the Chinese telco said.

The Singapore facility was its second built-up data centre in the region, following its Hong Kong Global Network Centre, and was touted to be "one of the most significant" network hubs outside China Mobile's domestic market.

The telco said it currently owned resources of three regional subsea systems--SJC, APG, and SJC2--and the SMW5, which linked Asia and Europe and would land in Singapore.

It added that it was looking to further expand its coverage, with plans for at least four new submarine cable systems linking Asia-Pacific, with Eastern Europe, America, and Oceania.

The new Singapore data centre would sync up with other data centres within China Mobile's global network, supporting connection services for the telco's various services such as roaming, cloud computing, and voice.