2010 Prediction: nothing (much) will happen

What holds for 2010? Not much methinks. There are good economic reasons for thinking so but then 2010 could well be the year when much of the marketing frenzy around E2.0/cloud-anything recedes as reality bites and issues start to be addressed in earnest.
Written by Dennis Howlett, Contributor on Dec. 16, 2009

This is the time of year when every pundit and his half fed dog wheel out their predictions. It's a topic from which I try to steer clear not least because there's always the embarrassing requirement to go back and find out just how far out of whack (and therefore how useless) you really are. Then there's the fact that many predictions are either obvious (because they're already on the cards) or self serving (because the author is striving to make a buck out of showing how gorgeous/cool/right on they are.) There is however one exception.

Miko Matsumura, the diminutive (even by my standards) and, by his own admission, smartly dressed but smug looking, chief handwaver for Software AG comes out with what I think is one of the best predictions: Nothing will happen in 2010. Don't be fooled by the shock jock style of title. Apart from being erudite, Miko has a brain the size of a small planet that cuts through BS faster than Luke Skywalker's light saber.

He logically argues that change takes time noting that:

Almost all of the hugely transformational items on any technologist’s list for the Enterprise are going to be growing slowly next year. Service Oriented Architecture(SOA), Business Process Management(BPM), Cloud Computing and others.

SOA and BPM? Wow - how long have we been hearing those stories? Ten...twelve years perhaps? Even now I get vendors asking: 'So what do you think of (my flavor) SOA?' and then wonder why the eyeballs roll in unison to a guttural groan? Much of Miko's logic is tied up in the notion that the whiplash you might expect to see coming out of recession won't impact tech - at least much - in 2010. I'd go further. I am of the view we'll see a double dip effect around the first half of 2010 as Obama's capitulation to Goldman Sachs in the running of the US economy bites deep into consumer spending, rippling across the Atlantic to crash onto the UK's and then EU's shores. Oops - I think  I just made a prediction.

Regular readers should by now know that such a curmudgeonly view is bang on the money for this irregular enterprisey person. Even so, there's good reason to think that might be true. Without wishing to turn this post into a political diatribe, I recommend studying Matt Taibbi's excellent evisceration of Obama's economic insanity in Rolling Stone. The only thing I'll add there is: I told you so. In the run up to Obama's election I said two things:

Looks like I was right on both counts. Of course no one wants to believe that when they smell the scent of change. Pity that scent has turned somewhat putrid. Back to the plot.

In 2009, I've not been short on slamming the Enterprise 2.0 and 'cloud-anything' hand wavers. The 'not what a crock' crowd certainly swung into action. In fairness it was good to see how that debate rolled out. It got many out of their bland, TLA driven marketing and into some serious thinking. That debate will continue, albeit at a far more measured pace in 2010. Ergo - nothing much will happen but what is hailed as promise will become more digestible, understandable and ultimately more acceptable to hard pressed business simply trying to keep afloat.

Another reason we'll not see much in 2010 on this front is because:

Here I am thinking that a re-evaluation of content in the context of business process will slowly seep into the consciousness of those seeking to extract knowledge value. It could for example mean that new services like the unfortunately named tibbr from TIBCO will make an impact. Instead of concentrating on people as the prime locus for knowledge, tibbr looks to the subject or content matter. According to the strapline: 'Soon, the information will come looking for you.' I like that idea as a refreshing change from assuming that the 1% of madly enthusiastic people in the organization will hog 99% of the attention but with as yet untested value being driven back to the business.

Augmenting his 'nothing' prediction, Miko homes in on a couple of other thorny problems that all things E2.0 were supposed to dissolve: getting over ourselves and trust. In the case of the former, Miko argues that: 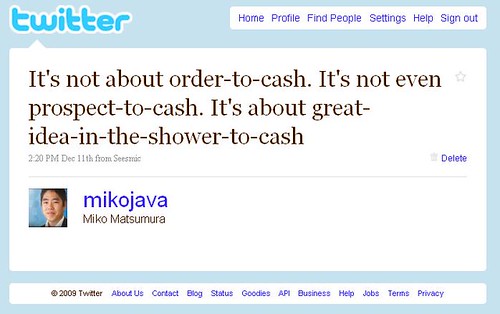 It's a fascinating thesis and one that many of 'us' in the real world see played out in even the smallest of organizations. You can see it in the tribal/herd mentality over the 'new' being grabbed by enthusiastic marketers. They declare the new truth, surround themselves with like minded acolytes and then announce victory before a line of code has been deployed. Shortly thereafter, reality sets in and we're back to square one. The ultimate Trough of Disillusionment.

The flip side is that I expect to see people like Oliver Marks, Sameer Patel and Nenshad Bardoliwalla make some serious progress in fostering the value of collaboration. They could be joined by the likes of MindTouch which just seems to keep relentlessly pushing the easy(ish) to build, integrated, collaborative framework from month to month. What they achieve may not be earth shattering in 2010 but moving the needle just a few points will make Dell's $6.5 million Twitter sales deals seem like the chicken feed they really are. At the very least I expect what they do to be rooted in a recognition there is a real world out there beyond the Silicon Valley bubble where real things have to get done in hierarchies that won't simply collapse in the manner some of the more strident adherents would have you believe. It may not be what we'd like but we have to operate in a world where 'what's in it for me' is probably more poignant moving into 2010 than at any time in the recent past.

Finally, Miko's take on trust resonates well with me and plays back to my snippy comments about Obama:

One of the reasons for Prediction 1 is the speed at which trust can be restored to the economy. The principle of exponential growth can be seen as a simple reiteration of the financial principle of Compound Annual Growth Rate (CAGR). However, exponential growth can also be a hiding place for charlatanism and multibillion dollar fraud schemes such as those perpetrated by Former NASDAQ Chairman Bernard Madoff.

The ripple effect is both cause and effect–the collapse of the pillars of the economy produces large scale job losses–which also puts fear and mistrust into the economy.

I'd like to add one more perspective. 2009 will go down - at least in my mind - as the nadir of E2.0 and 'cloud-anything' marketing. I sense that along the way, tech marketers not only lost touch with reality but lost the connection to the very markets they were trying to attract. The net result has been a sort of navel gazing and repetitive self congratulation that's painfully obvious in the links that people put in their endless re-Tweeting of anything favorable to whatever cause they're supporting. That ends in 2010.

There are way too many question marks in the minds of business both large and small. What E2.0/cloud advocates sweep aside as trivial matters around 'security' will need addressing in earnest. Otherwise potential buyers will simply run for the on-prem hills.

Some will read this, roll their eyes (and no doubt groan gutturally as well) thinking that yours truly is trying to close out the year with a particularly curmudgeonly and dim view for 2010. That would be a misinterpretation. Like Miko, I'm not confident much will happen in 2010 and for many of the reasons he espouses. What I do think is that the marketing tsunami will recede and those otherwise bright minds will start to work out where the rubber hits the road for early-ish adopters. Little will be said but quiet and restrained progress will be made to unlock business value in the labyrinth of SAP/Oracle/IBM business processes. If that happens then no doubt we'll hear all about it...on Twitter.