You only really get to know a piece of technology when you spend some time with it — especially one as personal and as different from your usual way of working as a tablet. It's been nearly a month since I first started using a BlackBerry PlayBook, and it's time for a more considered look at RIM's approach to the tablet form factor — and at the operating system that promises to be the future of its smartphones as well as powering all its tablet devices, QNX.

It turns out that the PlayBook's 7in. form factor is surprisingly comfortable. It's not pocketable, but it is easy to just drop it into a bag or backpack ready to pull out when you need it. When we spoke to the PlayBook's designer at BlackBerry World he noted that one of its inspirations was the familiar black A5 Moleskine notebook — and that's the essential nature of the PlayBook: an A5 electronic notebook. 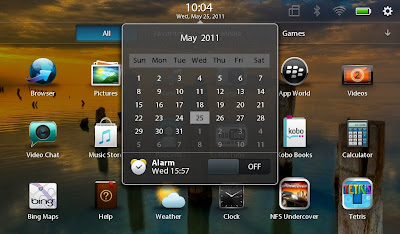 When you think of it that way, many of RIM's decisions start to make sense. While native email is due in a summer update as part of the BlackBerry Player, I didn't actually miss an email client — especially with a full HTML5 browser giving me access to my mail server's Web UI. In fact, web apps fill many of the PlayBook's gaps, taking advantage of Flash and HTML5 using RIM's derivative of the WebKit browser engine used by Google and Apple. 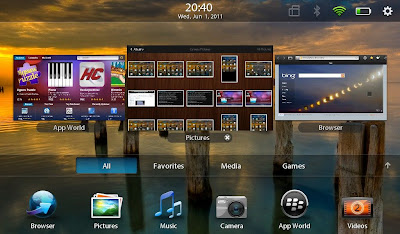 Multitasking is easy in PlayBook, just swipe to switch apps

I've played with BlackBerry Bridge, but a software update meant my BlackBerry stopped getting email — so I stopped using it, and stopped using Bridge. It turned out that while I liked Bridge I didn't miss it, and webmail (especially using Outlook Web App with my Exchange server) was an acceptable alternative.

That browser is probably the best feature of the PlayBook, and lets the little tablet punch way above its weight. Need Office? Just point the PlayBook at Windows Live Skydrive and you're ready to use the web-based versions of the tools in full fidelity — no mobile version of the site for you! That means you'll be able to use the PlayBook to work with PowerPoint, Excel and with OneNote shared from a desktop PC — and there's a built-in copy of Docs To Go if you need to work offline. One trick that RIM missed is the ability to add your own icon to a saved link to a web page — a tiny screenshot of the linked page in the PlayBook's launcher looks out of place alongside more professional icons. 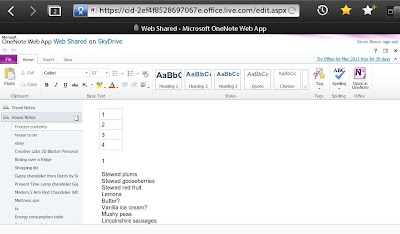 I found the keyboard better than many touch keyboards (but not as good as the Windows Phone 7 keyboard with its dynamic centroid detection). The 7in. screen means it's a lot easier to thumb-type in landscape mode than a 10in. tablet like the iPad or the new Samsung Galaxy Tab 10.1 — and I couldn't help but compare the PlayBook to the good old Psion 5. The keyboard rotates in portrait mode, but there I found the keys a little on the small side, and the large internal battery makes the PlayBook feel a little unbalanced when held on one side.

As the PlayBook's much smaller than other tablets, it turns out to be quite usable as a camera. RIM has done a reasonable job with the camera software — both still and video. The PlayBook is light enough to hold for long periods filming, and the large screen lets you see what you're recording. The spring software update also included a video chat application, which turns out to be very easy to use — and much better quality than expected. 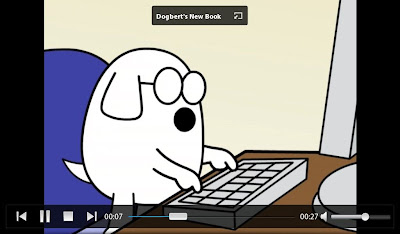 Watching a video podcast on a PlayBook

The screen is clear and bright, with plenty of contrast — and the result makes the PlayBook a great little media player. You'll need to side-load most video, and RIM makes that easy. Install the bundled connection software and the PlayBook looks like an external drive, connected via USB or over Wi-Fi. That second option is interesting, as it means that you don't need a physical connection to copy files to and from a PlayBook (the mark of the truly post-PC world!).

Sadly, what really lets the PlayBook down is the lack of software. Smartphones are defined by their apps, and many of the key smartphone applications haven't made it to the PlayBook yet. That may be because their authors are waiting for the Android and BlackBerry players later this summer, but some omissions seem odd — particularly Twitter clients like Tweetdeck and Seesmic, which could have easily been delivered on PlayBook's AIR platform. AIR isn't hard to develop for, and RIM's QNX extensions are easy enough to use in existing AIR applications. 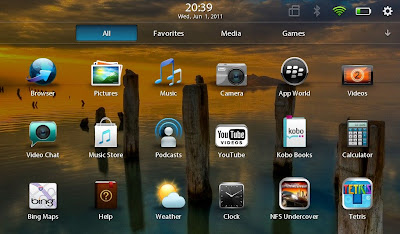 PlayBook needs more, and higher quality, apps to be successful

It's odd that RIM has yet to roll out PlayBook versions of key consumer apps — especially as the company has worked with Twitter, Foursquare and many IM companies to deliver BlackBerry versions of their tools. The larger screen of the PlayBook is ideal for many of these social applications, and while web user interfaces work well, the multitasking QNX platform seems ideal for AIR implementations. Certainly the Facebook app that launched in May is a prime example of what's possible with PlayBook social applications — but there's not much in the App World app store beyond IRC clients.

Even so, I'm still enjoying using the PlayBook. There's a lot of potential in the platform, and the updates promised over the summer should unlock many new features (including improvements to the security model that should make the PlayBook even more CIO-friendly). Its weight makes it an ideal companion device, and while it’s Wi-Fi only, there's scope to tether with a pocket 3G/4G hotspot or to tether to a BlackBerry or another phone.

Battery life isn’t as good as it might be: you won't get much more than a day's use out of the PlayBook before having to plug it in. There's not as much room in a 7in. device for a battery as in a 10in. one, but we did expect better from RIM — especially with the BlackBerry's power management features. RIM is promising regular software updates, and we're hoping that these will improve power management — especially around Wi-Fi, which is the main culprit…

So the final verdict? The PlayBook is definitely a promising device, and one clearly targeted at the enterprise rather than the consumer. It may not have the application ecosystem of the iPad (or even the BlackBerry), but apps are arriving in App World — and those that are already there are being updated. It's light and easy to carry around, and makes an effective companion device, both for PC and for phone (especially for a BlackBerry). We'd recommend investing in a portable hotspot to get the most out of the PlayBook on the road as you're going to want to spend a lot of time in its admirable browser. 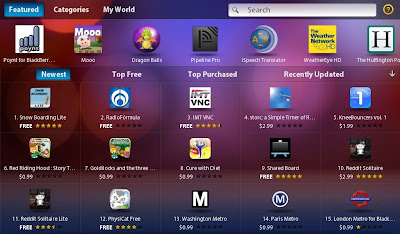 There’s a lot to like here, and according to RIM, a lot more to come. At the moment, though there's only just enough to make the PlayBook something you'll carry every day. Hopefully the summer updates will make it the go-to device it deserves to be. The summer also promises an update to BES that will allow administrators to control and manage PlayBooks, something that should accelerate industry adoption (especially if they're manageable using the Office 365/BES integration).