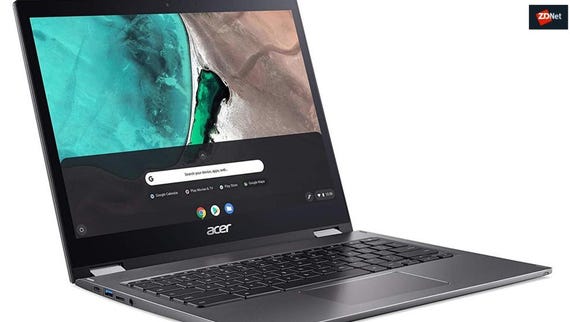 Much of what Acer announced during its annual global media event in New York City this week was a natural next step in some of its core product lines: New Chromebook laptops for education and the enterprise and new gaming laptops in its Nitro and Predator lines. The latter, though, served as a springboard for the company's newest product line expansion in some time. Citing research that half of gaming notebook buyers use their high-powered laptops for non-gaming applications and that 15% of such buyers use thee high-powered laptops for tasks excluding games, Acer introduced four new PCs in a new Concept D line aimed at creative applications.

The new brand includes three laptops and a desktop. Two of these are variants of PCs from Acer's gaming line that have seen their aggressive design toned down to be more office-friendly. The most interesting and powerful of the trio, though, the D9, puts an unusual spin (literally) on the 2-in-1 by placing the display on a vertically center-mounted axis. The advantage versus the more typical Yoga-style 360-degree hinge is that this allows the display to come closer to the user for stylus-driven work a la Microsoft's Surface Studio all-in-one desktop.

Acer experimented with this kind of functionality (albeit with a different kind of hinge) five years ago with its odd Acer Aspire R7, which placed the trackpad behind the keyboard. With the new D9, though, Acer has moved the trackpad to the right side of the keyboard where a numeric keypad would typically be. It's a better implementation than the R7, but results in a trackpad with an unusual portrait orientation.

According to Acer, all the new line's displays achieve among the highest color accuracy using the "Delta E" metric developed by Pantone. And Acer has used its ace in the hole, its thermal fan chops, to reduce the noise the laptops make to 40 decibels or lower. The company says that this is about the volume present in a library and a nod to the differences required from a laptop aimed at gamers who "like noise" (or who, as is more likely the case, have a higher tolerance for it). Acer compared these traits to those of the MacBook Pro as the market leader in laptops for creatives.

But despite Acer's insistence that its new laptops were created with the express preferences of designers in mind, there's no denying some of the visual cues have remained from its gaming laptops. These include multiple sharp angles at the corners and a triangular grid enclosing the massive vent at the rear of the machines. Acer may beat the MacBook Pro in raw specifications, particularly for the money, but is a long way from the more demure time-tested aesthetic of Apple's flagship or even workstation-class competitors such as HP's zBook series. On the other hand, if the alternative is less likely to be the MacBook Pro and more likely to be one of the company's appropriately gaudy Predator laptops, the design is a win.

Where Acer has executed best on the creative aesthetic is its new D 900 desktop, a stout tower that features a woodgrain, Qi-enabled top and hook for headphones that pops out in an homage to the CD tray. Acer may have felt the need to raise the stakes here even further due to the stronger competition for stationary workstations in the Windows world and less need to focus engineering resources on the thermals.

The gaming laptop market is a lucrative niche in which Acer has found success, in part due to strong support from Intel in e-sports and promoting its PCs via its own gaming league that appears to be heading stateside. It represents the opposite end of the computing spectrum from Acer's other growth engine, Chromebook laptops. There's only so much that the best fan designs can do to reduce the bulk of a laptop optimized for the fastest, overclockable CPUs and GPUs. If the company sees gaming laptops as the only other legitimate alternative for something delivering the Concept D's level of power, then it may not need to create much further differentiation. But if Acer can bring more of the optimized aesthetic from its Concept D desktop to its high-powered laptops, it could make a more credible pitch in melding the performance and polish that attracts creatives.