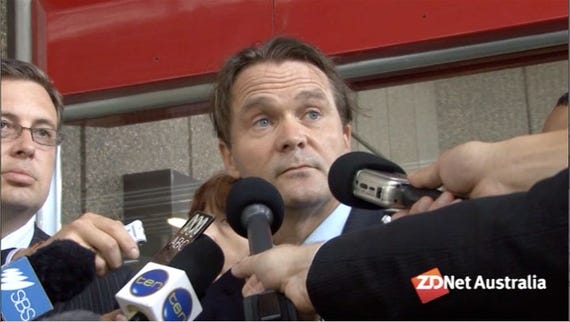 Executive director of the Australian Federation Against Copyright Theft, Neil Gane, spoke in front of the Federal Court about his loss against ISP iiNet.

The federation, which represents film and television studios, first took iiNet to court in November 2008, arguing that the ISP infringed copyright by failing to take reasonable steps — including enforcing its own terms and conditions — to prevent customers copying films and TV shows over its network.

However, Justice Cowdroy ruled for iiNet today, saying he found that iiNet did not authorise the infringement of the studios' copyright.

A timeline pinpointing key dates in the iiNet trial can be found on the ZDNet.com.au website.

Gane prefaced the interview with a statement:

Today's decision is very disappointing to the film industries, which launched the case, and to the 50,000 Australian's who are employed in the Australian film industry, but we believe this decision was based on a technical finding centered on the court's interpretation of how infringements occur and the ISPs' ability to control them.

iiNet accepted the evidence we provided as legitimate proof of copyright infringement's on their network. We are confident the government will not intend a policy where rampant copyright infringement is allowed to continue unaddressed and unabated across the internet. We will now take the time to review the decision before making comments going forward.

Then the doorstop began.

Where do you go from here to stop this problem of copyright?

It's very recognised by government that it is a problem. We are confident that, going forward, government policy will not be supporting an outcome which allows the rampant and unaddressed infringements that are occurring across the internet.

Is this a green light around the world for internet users to continue to downloading movies? Do you agree with that?

We are still reviewing the decision and I'd rather not address this at this juncture.

Do you plan to appeal?

As I said, we are still reviewing the decision. It was only made this morning. We are not ruling anything in or anything out but we'd rather not make a public announcement at this juncture.

As I said, we are still reviewing the decision. We would rather not make a public announcement at this juncture but we are confident that government will not be supportive of a policy outcome which allows for the continued and unabated rampant infringement that is currently occurring.

Here you were trying to get the ISPs to be your gate, to be the enforcers, and that's now failed. Surely that must be a devastating blow to your campaign against infringement.

Well, of course, we are very disappointed in the outcome of the court today. And we launched this litigation to try and support and protect the 50,000 Australians who are working in the Australian film industry.

iiNet — it was a five-month investigation where tens of thousands infringements were found to be occurring across their website.

Why not Telstra for example? They have people downloading and sharing files illegally.

We were investigating. It was a five-month investigation into iiNet. The case was about iiNet and there were tens of thousands of infringements that were found to be occurring across their network. We provided them with evidence, evidence that their CEO Michael Malone said was "compelling" evidence.