I'm sorry. I made fun of all of you with Apple AirPods sticking out of your ears and thought Apple made a ridiculous accessory that would only price gouge consumers when there are other Bluetooth headsets available for much less.

It turns out they really are magic, and in some situations, they are absolutely perfect for iPhone users. Jason wrote in his ZDNet full review that the AirPods blew away the competition, but I still wasn't convinced. 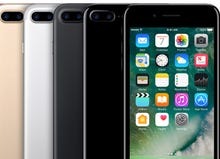 Perfecting the 6s Plus with water resistance, dual cameras,lightning performance The iPhone 7 Plus is the best iPhone, as it should be.

I have several sets of Bluetooth wireless earbuds, primarily designed to accompany me on runs. I've used these during my daily commute as well. But, tired of having to deal with cables, finger gymnastics to insert them, and various charging attachments, I always ended up going back to wired headsets for my 90-minute round-trip train commute and 30+ minutes of walking.

iMore's Rene Ritchie posted a tweet link to Best Buy having AirPods in stock, so I ordered a pair and had them two days later. Apple still has a six-week estimated ship date for AirPods, so I was shocked I was able to get them so quickly through Best Buy.

After a week with the Apple AirPods, here's why I think they are perfect for the commuter:

After realizing how great the AirPods are for commuting, I was thinking of using them for running. While the AirPods never fall out on my commute, I know they would if I sweated, so I then saw that some companies, such as Earhoox, have the perfect solution. I almost bought some. However, there is no water- or sweat-resistant rating for the Apple AirPods, so I will continue to use Bluetooth headsets from Jaybird, Bose, and BlueAnt for running.

Hopefully, AirPods version 2.0 is launched with some level of water resistance so I can go running with them. Until then, I have no regrets paying nearly $200 (tax and shipping on top of the $159 price) for the perfect commuter headset.