Let's not kid ourselves: Today's enterprise is still largely a Windows world.

And with the new improved Windows 10, Microsoft will surely rule the roost for some time. Will it do so ten years from now? Perhaps not.

Writing earlier this week for Tech.Pinions, Tim Bajarin has an interesting take on the next wave of enterprise workers who won't want to live in that world of Windows.

"This younger generation does use PCs. However, they actually spend the most time on their iPhones and iPads and Macs are mostly relegated to serious productivity projects. More importantly, they know iOS inside and out as they spend much more of their day in this operating system then they do on any computer they have. I believe Apple understands this better than anyone and their most recent iPad Pro is a nod to this trend. More importantly, I see Apple using this to drive millennials towards making iOS their OS of choice as they move into their careers and new jobs. In fact, within 5-7 years, I suspect Windows will not even be of interest to this younger set, as iOS will be the device operating system that dominates their work and personal lifestyles."

I think Bajarin is more right than wrong here.

Indeed, that's why earlier this month, I said I may go "all in" on iOS with an iPad Pro and ditch my laptops.

No, I don't work in an enterprise these days. I did spend 15 years in corporate I.T., however, and have a grasp of the way enterprises work. That's why I'd never suggest the entire corporate world make the switch: There are still plenty of good reasons to run an enterprise on Microsoft products, both on the front and back ends.

I'd argue that we're in a slow, methodical transition however. One that could result in less reliance on Windows and more on a slimmer, lighter environment that still lets you get work done.

Look around and you can see the signs of that transition. The biggest one perhaps is Apple's partnership with IBM that's resulting in software applications across multiple industries, ranging from health care to sales to financial activities.

But you don't need to look to IBM and Apple to understand Bajarin's point. Look closer to home.

My kids, for example, are involved in numerous activities and sports. And when I talk to the parents of other children at these events, the conversation nearly always turns to how mobile technology is affecting the younger generation. 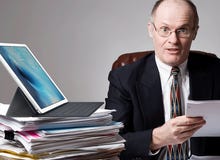 Without Cloud, iPad Pro is an executive's desk paperweight

Just who is this device made for, anyway? And what is the usage case?

And without fail, a comment like this surfaces in the conversation, "My kids will grow up without knowing what Windows is. And even if they do, I don't think their kids will."

Granted, there are still a multitude of Windows users in schools, colleges and so forth. Even there, however, you can see the signs of change: There's a growing number of iPads (and Chromebooks) finding their way into the classroom. And in the personal lives of these kids, Microsoft isn't number one: They're on iPhones and iPads for fun and games, not to mention social apps.

To be sure, iOS isn't the current answer for every enterprise worker today. Bajarin is thinking ahead though, to the enterprise workers of the future. And what is that group using today? Lots and lots of iOS devices.

Apple needs to keep maturing the hardware and underlying platform -- something it's doing with the iPad Pro -- to keep the next wave of information workers on board. As the hardware and iOS itself gets more powerful, the enterprise apps of tomorrow will follow.

In some cases, they're already here.

Join Discussion for: Apple iOS: The next enterprise platform?