Apple could soon move more of its apps to Android, which could put encrypted messaging into the hands of the wider mainstream public.

Chief executive Tim Cook reportedly told his staff at a company-wide event that Apple may soon bring other apps and services to the rival platform. Cook said that bringing Apple Music to Android in November was "a way of testing the waters for growing its services division through other platforms." 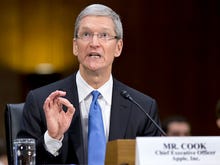 Until Apple Music's debut on the Google Play store last year, Apple's services were almost exclusively for its iPhones, iPads, and Macs, with few exceptions (notably iCloud on Windows). The move to port software to its rivals' platforms could be a boon to Apple, particularly at a time with declining growth in its iPhone division and growing revenues in its software and services unit.

That could see iMessage, the company's messaging app -- one of the most popular apps across Apple's mobile and desktop range -- expanded to Android.

But what many don't realize is that iMessage is encrypted end-to-end, which prevents even Apple from accessing user messages. (There is a known caveat: backed up messages to iCloud are vulnerable to government warrants.)

Apple rolled out the new privacy feature in iOS 8, thought to be in response to claims in documents leaked by whistleblower Edward Snowden that said Apple was a participant in the notorious PRISM surveillance program.

That move to end-to-end encryption quickly riled some in government.

Sister-site CNET reported in 2013 that the Drug Enforcement Administration (DEA) was no longer able to eavesdrop on suspects' text-based communiques because Apple's encryption made it "impossible to intercept iMessages between two Apple devices." The FBI piped up soon after, warning that as encryption becomes more mainstream, it will be harder to surveil and catch criminals. These claims that criminals are "going dark" are unfounded, particularly in the wake of new research that suggests that federal agents have access to more data today than they ever did.

It's not clear when (or even if) Apple will make the move any time soon. In bringing iMessage out from Apple's exclusivity, it could could open up the encrypted messaging app to as many as one billion Android device owners.

The more ubiquitous and mainstream encryption becomes, the greater the devastation to the US government's anti-encryption efforts.