NEW YORK — For the past two weeks, federal agencies and the executive branch have launched a cacophony of critique of Apple and Google for bolstering the encryption on their users' smartphones. 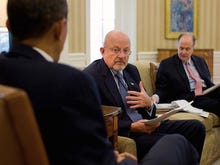 Thanks to a three-decade-old secret executive order, Fourth Amendment protections against warrantless domestic surveillance is not as strong as first thought.

That, the opposition camp says, will result in drug dealers, pedophiles, identity thieves, and other violent criminals evading capture, leading to an uptick in crime. That will affect millions of Americans who each year are classified as victims of theft and robbery, violence, and sexual crimes.

Made up of the FBI and the NSA, the outgoing Attorney General Eric Holder, and members of Congress, they are calling for laws to be changed, and Apple and Google to face sanctions for their privacy protections.

But this was described by The Guardian's Trevor Timm as a "misleading PR offensive" to scare Americans into believing encrypted devices are a bad thing.

The federal agencies' opposition to Apple and Google's move to double-down on device security is nothing short of fearmongering.

To make matters worse, on Saturday a piece by The Washington Post's editorial board declared there must be a "compromise" on smartphone encryption, adding yet another major voice to the chorus of criticism.

The "too-long, didn't read" version is that the Post's editorial board believes that this level of security affects "relatively few cases" and is "not about mass surveillance." It adds that this "seems reasonable and not excessively intrusive."

Its solution? A "back door" for law enforcement — exactly the kind of back door that Apple, Google, and other Silicon Valley technology giants denied they installed in the wake of the PRISM program's disclosure.

In a naive example of wishful thinking, the Post's board idealizes that a "kind of secure golden key" that Apple and Google would retain and would use only when a court has approved a search warrant.

Some initial reaction from three experts from the Twittersphere:

The story had at least one thing right. "This is an important moment in which technology, privacy and the rule of law are colliding," the board wrote.

The sub-500 word piece does not, however, represent the views of the wider Washington Post editorial staff and journalists. Amazon chief executive Jeff Bezos, who bought the newspaper for $250 million last year, has remained tight-lipped about whether or not his company's flagship Fire Phone will offer the same encryption as Apple and Google.

Smartphone encryption is entirely on Apple and Google's heads. It's not in response to legislation; it's in response to a lack of legislation supporting the idea. It also comes at a time when trust in the government is reportedly at an all-time low.

"The US government and police officials are in the
midst of a misleading PR offensive to try to scare Americans into believing encrypted cellphones are somehow a bad thing."
— Trevor Timm

Similar technologies exist, like Tor, PGP email, and Silent Circle, all allowing for anonymous or encrypted communications with friends, business partners, journalists and sources, and even the intelligence agencies and law enforcement agencies themselves.

These are not criminalized. Doing so would put sources, investigations, and lives at risk. When the tables are turned, why is smartphone encryption any different?

However, in the grand scheme of things, Apple and Google's actions are not the be-all and end-all to absolute privacy.

There will be a small number of cases where the federal government may have to go to the device owner directly. The rest of their data can still be intercepted through pen registers and wiretaps. Data stored in the cloud — most of it nowadays, particularly in Apple and Google's relatively closed systems — can still be handed over by the companies to law enforcement. There will probably be little change in how text messages, emails, phone calls, geolocation data, and other uploaded data is collected.

But it's nevertheless a good start.

Although much of the NSA surveillance scandal has focused on U.S. citizens and those within the fifty states, Apple and Google's response affects those in more oppressive nations. Bahrain, Qatar, Saudi Arabia, Iran, Russia, Sudan, and more are considered "enemies of the Internet."

Preventing governmental access to the most basic and fundamental data — marriage and religious status, and sexual orientation — can save lives. In some of these countries, falling foul of their oppressive law can lead to a swift, unjust public hanging.

Apple and Google can be saving lives in places most Westerners have never even heard of.

Meanwhile, FBI director James Comey picked on Apple, saying the company was allowing its customers to "place themselves beyond the law."

This, coming from the strong-arm de facto unit of the NSA, which took a public law and interpreted it to allow vast, near-unfettered access to foreign and domestic communications? "Beyond the law" goes both ways. The U.S. government, over multiple administrations, has demonstrated this with the help of Edward Snowden's disclosures.

The way that law enforcement and federal agencies have acted thus far, by using terrorism and child abduction as a way to win the hearts and minds away from the NSA surveillance scandal, is in itself heartbreaking.

Now is the time to restore faith in the technology industry — one caused by a disproportionate and overzealous White House over the past fifteen-or-so years. But a happy compromise, at least in my eyes, cannot be reached any time soon. Silicon Valley has lost its trust in the U.S. government, and so their response is reactionary, albeit still well thought-out.

This "fear, uncertainty, and doubt" campaign from the Obama administration and its law enforcement won't stop any time soon.

For the fact that Silicon Valley technology giants are putting its customers before the U.S. government is putting its own citizens, that says a lot about the state of our country today.

Join Discussion for: Feds only have themselves to blame for Apple...