Full Bio
Posted in Between the Lines on September 23, 2013 | Topic: Smartphones

Apple said it sold 9 million iPhone 5c and iPhone 5s devices and the total easily topped guesstimates from analysts looking for a figure ranging from 5 million to 8 million.

Apple didn't disclose the split between iPhone 5s and iPhone 5c, but Barclays analyst Ben Reitzes was expecting sales of 2 million to 3 million iPhone 5s devices and another 3 million for iPhone 5c. Given the supply constraints with iPhone 5s it's safe to assume that Apple's colorful flavors accounted for the better than expected unit counts.

In a statement, Apple CEO Tim Cook noted that the iPhone 5s was sold out. 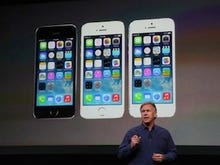 Although there was a lot of consternation about the iPhone 5c pricing and how it may limit emerging market sales, Apple's high-low smartphone strategy appears to be a nice way to get volume and preserve profit margins.

Here's what we need to know going forward to really evaluate iPhone units and the plan with iPhone 5c and iPhone 5s.