A team of over 100 scientists who had been building a super-sophisticated detector to find the universe's dark matter had to suspend operations while in quarantine. But they didn't stop working. They developed a super-simple, super-cheap ventilator they hope to make in volume to fight COVID-19.
Written by Tiernan Ray on April 9, 2020 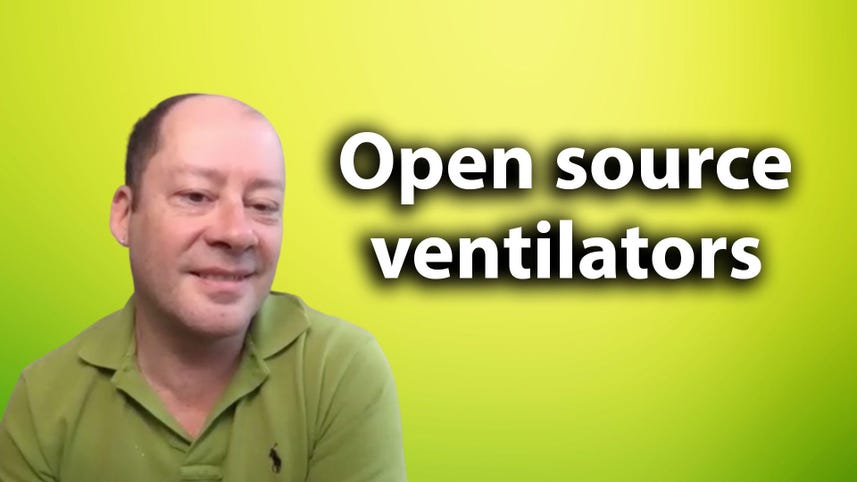 Someday, when someone asks what you did during the COVID-19 pandemic, most of us will have unimpressive answers: watched Netflix, practiced cooking, took up guitar, survived.

A few, though, will have some amazing stories, such as the doctors and nurses who are fighting a war to save lives. And then there are the scientists who can't get into their labs and have taken up some astounding side projects.

That's the case for Cristiano Galbiati, a physicist at Princeton University, who, with help from over 100 scientists from Italy, France, Canada and the U.S., prototyped a ventilator that can be put together relatively easily with mostly off-the-shelf parts. The device costs just hundreds of dollars versus the tens of thousands such a device usually costs, and plans are underway to produce it in volume.

It's a side project while Galbiati has been quarantined in Milan, Italy, but one that may address a crisis of medical devices.

A "global scramble" has broken out among nations for scarce medical supplies, reports The Financial Times. Although there are disagreements about how much a ventilator should be used for COVID-19, there is overall a serious shortage of the devices for COVID-19 and for other critical patients.

Massachusetts plans to ration ventilators based on who has a better chance of surviving with one, The Boston Globe reports, and Pennsylvania is doing the same, reports the Washington Post.

Galbiati and team have arrived on the scene with a plan called the "Mechanical Ventilator Milano," or MVM, a device that is "designed to be simple, cheap and easily reparable." It is described in a paper posted on March 27th on the medRxiv pre-print server.

For years, Galbiati and colleagues around the world have been involved in trying to detect "dark matter," a hypothesized cloud of matter that may make up the vast majority of the mass of the universe, but the nature of which is still a mystery.

Ordinarily, Galbiati and colleagues would be focusing on their current project, a mile below the Gran Sasso mountain range in central Italy. Called the Global Argon Dark Matter Collaboration, formed in 2017, the collective of scientists has been for the past couple of years building a dark matter detector called the "DarkSide-20k." Deep underground, it will be shielded from the radioactive particles that bombard the earth's surface and that make dark matter hard to find. (More information on the DarkSide Web site.)

But Galbiati and colleagues have been taking a break from that work while Italy has been besieged, one of the countries hit hardest by COVID-19. They quickly realized that there is an important overlap between their dark matter work and ventilators, according to responses offered to ZDNet in email.

"While in lockdown for the Covid-19 virus in Milan, Italy, Cristiano Galbiati recognized the need for additional ventilators early in the pandemic," the MVM group said in a statement. The dark matter search "includes experience with gas handling systems and complex control systems – the same capabilities required in hospital ventilators."

Indeed, a ventilator seems a walk in the park compared to what Galbiati and colleagues have been designing to sit under the Gran Sasso mountains. The whole project was spelled out in exquisite detail in a pre-print paper back in 2017.

Here's the rough outline. To detect scattering of particles that might hint at dark matter, the scientists are constructing a stainless steel tank fifty feet high and fifty feet in diameter. Inside, a capsule referred to as a "time projection chamber," containing the detector itself, sits inside another chamber, called a cryostat, which has an elaborate system of piping to conduct liquid and gaseous argon and nitrogen in and out of a series of compartments. Galbiati and team have had to design precise mechanisms to purify several tons of gas and to keep it circulating at specific levels of pressure, all of which also includes specifying the tolerances of numerous components that have to be procured to put it all together.

Also: Some US communities will 'open up' from COVID-19 lockdown before others, says Rep. Bera

Next to that, a ventilator is simpler, but it still has challenges. Ventilators are "complicated pieces of machinery" that cannot be "created or crafted quickly," as Dr. Howard Greller of St. Barnabas Hospital of Bronx, New York, explained in a video by The Washington Post. The MVM is designed to be the antidote to that complexity.

Ventilators emerged from the practice of the anesthesiologist in the middle of the last century. As recently as World War II, an anesthesiologist had to squeeze a bag to push anesthetic drugs into a patient's lungs. Starting in the 1940s, a variety of devices were developed to automate that bag squeezing. The creators of the Milano project draw inspiration from one particular design, introduced in 1961 by a British anesthetist named Roger Manley that was noteworthy for its simplicity. The "Manley Ventilator," as it came to be known, had the novel approach of not requiring a power source, being powered instead by the gas being put into the patient.

Galbiati and colleagues have applied their considerable ingenuity to making a modern-day version of the Manley device. Their design is like an elegant reduction of the working elements of the dark matter detector: valves to control the flow of air and oxygen into the patient, and to move carbon dioxide out, sensors to monitor pressure, and a control system to command the valves and sensors.

The control unit itself is made up of three circuit boards: an Arduino-compatible microcontroller board, an input-output board running on the Raspberry Pi chip, and a custom-made "hub" board designed and prototyped by Galbiati's colleagues at the National Science Laboratory in Gran Sasso. The team has outlined a cloud-based system of remote management for the ventilators, when a Wi-Fi connection is turned on for the ventilator.

Galbiati and his teammates write that the whole ventilator can be put together "based on a small set of clear instructions," while the software to run the control unit is open-source and can be loaded via a "simple" process.

A series of videos on YouTube posted by Galbiati shows the system being tested out.

The group has submitted their design to regulatory bodies for approval, including the U.S. Food and Drug Administration and Europe's equivalent, the ISS. Documentation has been submitted, but the group is not sure how long the approval process will take but hopes to know soon, Galbiati and colleagues told ZDNet. The MVM is in compliance with the U.K. directive regarding "minimally clinically acceptable" ventilators for COVID-19.

The MVM team is working with "industry members" and "Canadian and American companies" to build an initial run of the machines. They declined to identify the parties save for Elemaster S.p.A., a manufacturing services firm.

MVM is not the only innovative effort. Initiatives seem to be popping up all over the place. Massachusetts Institute of Technology, for example, has open-sourced blueprints for a ventilator it calls E-Vent, originally invented in 2010, and has built a prototype, as ZDNet has reported.

Galbiati and team declined to comment on differences between their system and the E-Vent, stating, "Ventilators are badly needed. We wish success to everybody developing them."

The battle for resources suggests any number of initiatives will find an opportunity if they can be built in volume. Given the experience of Galbiati and colleagues with the most complex instruments in the world, there's reason to believe they're uniquely qualified to contribute.

There are ways you can help. Galbiati's dark matter collective is funded by multiple institutions, including the U. S. National Science Foundation and Italy's Italian Istituto Nazionale di Fisica Nucleare, but the ventilator project needs its own support. One way to donate is the Go Fund Me page for MVM, which as of Thursday had raised over €31,000 of an original €20,000 goal. If you want to make a direct contribution, the funding section of the MVM web site has additional options. And you can also send a direct email to the main contact email for MVM.