Asus has shown three new Transformers -- tablets that convert into clamshell-style notebooks -- running Microsoft's next-generation Windows at this week's Computex trade show in Taiwan. It has covered all the major options for consumers and for business users: there's a choice of running Windows RT on an ARM-based version, Windows 8 on an Intel Atom, or Windows 8 on a fast Intel Core processor.
Written by Jack Schofield, Contributor on June 5, 2012

Asus has shown three new Transformers -- tablets that convert into clamshell-style notebooks -- running Microsoft's next-generation Windows at this week's Computex trade show in Taiwan. It has covered all the major options for consumers and for business users: there's a choice of running Windows RT on an ARM-based version, Windows 8 on an Intel Atom, or Windows 8 on a fast Intel Core processor. Asus even threw in a new all-in-one PC with an 18.5-inch screen that detaches to provide what founder Jonney Shih described as "the world's biggest tablet".

The Transformer range has been a great success as a niche product, and Asus has recently expanded its offerings with the more powerful Transformer Prime and the cheaper TF-101. Both of these run Google Android on ARM-based processes, so replacing Android with Windows RT is a relatively simple upgrade.

This is the "World's first Windows RT consumer device", and Nvidia has posted a video showing it in operation (below).

The Tablet 810 runs Windows 8 on an Intel Atom processor (Medfield version) with 2GB of memory and 64GB of storage. Its 11.6-inch Super IPS+ screen display also offers 1366 x 768 resolution, but has Wacom digitizer stylus support is as well as 10-point multi-touch support. It will work with your fingers, like other tablets, but the stylus offers much greater precision.

Both the 600 and 810 are supplied with a docking keyboard that converts them into laptops. The keyboard part includes a trackpad, an extra USB port, a second battery, SonicMaster sound technology and built-in NFC sensors.

It will be interesting to see how the Tegra 3 and Atom compare for speed, and how well Android competes with RT for speed and features. The high-end Transformer Book -- which Asus describes as "the world's first convertible notebook" -- runs Windows 8 on a third-generation Intel Core processor (Ivy Bridge version), with 4GB of memory and options for both SSD and HDD storage. The range will include versions with Core i3, i5 and i7 processors and with 11.6-inch, 13-inch and 14-inch Full HD 1920 x 1080-pixel IPS+ screens.

The Transformer Book is the Windows 8 equivalent of the Transformer Prime, and has a shiny shiny finish like Asus's Zenbooks, which are Intel Ultrabooks.

Finally, Asus expanded its range in a new direction with the Transformer AiO, described as "part tablet, part All-in-One PC".

The Transformer AiO can seamlessly switch between being an all-in-one for desktop use, and a giant multi-touch tablet with an 18.4-inch screen. Users can also switch between Windows and Android.

Asus says the "multi-touch LED-backlit display which can be easily removed from its base station to become a wireless display for the AiO PC, extending the range of the PC and allowing users to continue with their work anywhere in the home. The display can also be converted into an Android-based tablet for the home with the press of a button." 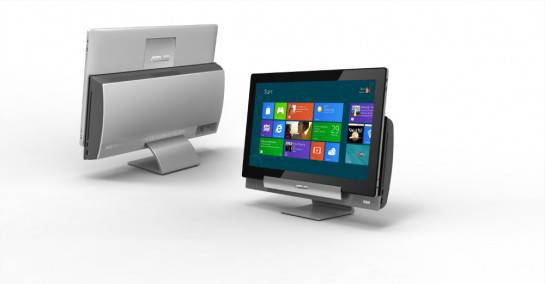 It's not clear whether the AiO has an extra ARM processor or whether it uses BlueStacks to run Android apps under Windows. However, Bluestacks has just annouced a deal with Asus to ship its system with all Asus's Windows machines.

The AiO certainly sounds odd, but it could have practical applications as well as home uses. One complaint about touch-screen all-in-ones, of which there are many, is that it's inconvenient to do a lot of touch-based work when the screen is vertical. In this case, you can just remove the screen and lie it flat on the desk. Or you could detach the screen and mount it on a wall or in a table and use it as a public-access terminal. While the price remains unknown, it will be a much cheaper option than using a 40-inch Microsoft Surface computer.