Blackbox Republic, the personal relationship oriented members only community, launches on a subscription based model today. The community aims to fill the space between online dating industry sites and the online social networking world.
Written by Oliver Marks, Contributor on Dec. 8, 2009

Blackbox Republic, the personal relationship oriented members only community, launches on a subscription based model today. The community aims to fill the space between online dating industry sites and the online social networking world.

Think of Blackbox Republic as a fashionable online 'members-only' club where you might expect to meet people with similar interests to your own, and ideally the person of your dreams. In much the same way as you might set out to explore a fashionable bricks and mortar venue in the hopes of experiencing a stimulating crowd, Blackbox Republic enables you to reveal as much or as little as you chose to the individuals you meet in their version of a chic online space.

This differentiation is important: while Facebook is a vast casual social graph where the majority of users leave their 'it's complicated' profile and personal details open to everyone from their Grandmother to their employers by default (often not a wise idea), it's not well suited or designed for more intimate goals.

Dating sites enable you to put specimens that match your self-defined desire algorithm in your online cart and initiate an interview/dating process. While both these models work to meet new people to some degree, Blackbox Republic is defining some interesting new ground.

As anyone who has used an online business collaboration system knows, 'groups' - sets of people granted access to view given projects, which are often hidden from other users if IP or trade secrecy requires it - are often an essential, mission critical degree of granular control. This thinking is available to Blackbox Users at three levels.

Just as in your 'real life' social life, you may not want to reveal to friends that you are going to a party where some of their faces wouldn't fit: while it is easy to organize in person parties and events on Blackbox Republic, it's also possible to be discrete about who knows about it.

The goal is to 'remix dating, love and social life' so you don't default to null in an online dating or friendship database schema bucket, but are able to cross pollinate different parts of your online life - just like in your real life. 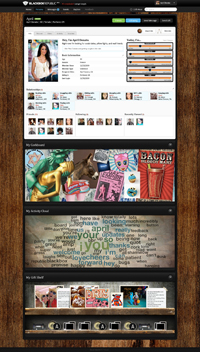 Members 'vouch' for each other - they are able to validate that you are who your online persona claims to be and that you are a friend in good standing - and are able to give each other gifts which you can display on a shelf in your Blackbox Republic space. This online 'living space' also has a cork board to display whatever you want.

Blackbox Republic allows you to express your current state (Orientation, Status, partners, lovin' and vibe) using a set of sliders to signal your current status, while a tag cloud throws up   your most frequently used words in the internal Twitter-like signaling system. These elements flesh out a core goal of creating an online space that will enable you to meet with Blackbox Republic friends in a city you've never visited - let's say Berlin - who have been vouched for by your friends and who you have developed a rapport with.

Now you should feel safe going to meet them for a night out when you visit that city, they introduce other friends and your social life takes off. This is something Facebook and similar are nowhere near emulating.

If we go through the social network user era by interfaces we start with Friendster, with its slightly Soviet, clunky UI, which was usurped by the blinky animated gif scrapbook world of MySpace. Facebook came along with their extensible model and is current king of that hill, albeit with a curiously anodyne interface for such a personal free service (if we discount the endless farming games and other add ons).

Blackbox Republic is arguably an Apple product to Facebook's Windows look & feel: a much more intimately crafted, fuller featured personal user interface which should appeal to Apple generation sensibilities. It's not for everyone but there is a huge opportunity to differentiate - particularly when a monetary value is associated with being a member (Subscriptions are $5, $25 and $49).

Video is embedded deeply into Blackbox Republic, and this could be a powerful advertising device for those seeking friends and partners within that community now that Flip and DV cameras are ubiquitous.

A goal of providing a 'safe, private, member-driven place for all orientations, relationship combinations and lifestyles to meet-online and in person' is a laudable goal, but not without barriers. Keeping it classy and sophisticated could be a challenge and as I'm sure you've experienced the lowest common denominator always seems to be the most visible whether in a bar, music venue or trolling on forums online.

Apple have succeeded by creating highly intuitive, graphically attractive experience. Blackbox Republic need to make sure the way you control your online persona - what you are revealing and to who - is as effortless and understandable as possible, to build confidence and trust in the service.

When you look at the alternatives - or lack of them - Blackbox Republic could be inventing a whole new market segment which blends online and in person socializing, and I can't think of many people who don't want to meet more interesting people while being able to discretely filter out the less appealing.

The business challenge of course will be to fill the pool full of fish worth catching...