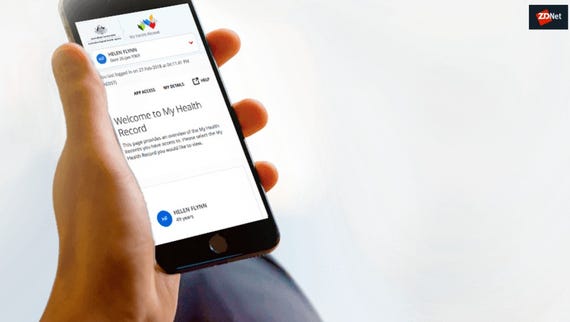 The federal government is automatically signing people up to its My Health Record scheme, with the goal of having issued a digital medical file to all Australians by the end of this year.

Individuals will have the ability to opt-out of the service; however, the information will not be destroyed as first thought, rather it will be kept in somewhat of a limbo.

Offering further detail on the online record last month, Tim Kelsey, chief executive of the Digital Health Agency (ADHA) -- the agency charged with overseeing the My Health Record and ensuring citizen information is secure -- said that after a record is cancelled, no data will be attributed to it until it's reactivated, at which time two years' worth of Medicare Benefits Schedule (MBS) and Pharmaceutical Benefits Scheme (PBS) data from that date will be repopulated.

Kelsey told the National Press Club that when a My Health Record has been cancelled, the contents of the record are dumped as per government data removal procedure, and becomes unavailable for secondary use.

However, on the My Health Record website the ADHA explains that a reactivated record will still display what was there before deletion.

"If you re-register online, your record will include information which was in your record before it was cancelled," the ADHA wrote.

Those re-registering via the call centre can however ask for the record to be cleared of all previous documents.

"These documents will remain in the archive but will not be able to be viewed by you, your representatives, or your healthcare providers," the agency continues.

"Even if you cancel your My Health Record, healthcare providers will continue to hold copies of any records they have uploaded to My Health Record stored on their own clinical information system."

Healthcare providers will not be able to access or upload documents to the cancelled record, however.

"You or your representative can only access the record by making a request to us," the ADHA said. "Your My Health Record may be accessed by us for the purposes of maintenance, audit, and other purposes required or authorised by law."

Currently, more than 5.7 million Australians have a My Health Record, and those who don't want one will have from July 16 to October 15, 2018 to opt out.

Those who don't opt out of the service will have the record automatically created, and once the individual or a clinical professional activates it, it will start to populate with data including the last two years of their MBS and PBS information.

Other information sources will only upload into the record as they happen, for example when the individual visits a GP or gets a blood test.

Key clinical documentation will eventually be uploaded, such as pathology reports and discharge summaries from hospitals, and users can also upload their own information.

Users will be able to see a real-time audit log of who has accessed their record, and can set an SMS alert that notifies them of that occurrence. Users can also withhold a document from the view of their clinician.

The ADHA alongside the Department of Health last week said that around 500,000 Australians will opt out of having a My Health Record if the same behaviour exhibited in a trial extends to the rest of the country.

During Senate Estimates, an official from ADHA said that in its trial involving 1 million people, only 1.9 percent opted out.

Health holds crown as the most breached sector in Australia

The Office of the Australian Information Commissioner has received 63 data breach notifications in first six weeks of the scheme's operation.

Join Discussion for: Cancelled My Health Record data to be kept...