Automating the data center has been a topic of discussion among IT teams for more than 20 years, but most enterprises remain slow when it comes to adopting these technologies.

"The secret sauce for the modern data center is automation," said Dennis Smith, research vice president at Gartner. "That's really why hybrid scale providers are able to do what they do. If you can squeeze cost, it can eliminate human error. It's fundamental. You really have to have it if you're looking at really being successful with whatever your digital strategies are."

In many companies, data center automation occurs in pockets, Smith said. "The compute area is probably a bit ahead of the storage area, but the networking area is still lagging," he added. "You may go into organizations that are pretty highly automated, but you still find that they're doing manual IP address assignments."

Forrester refers to this as "islands of automation," said Forrester senior analyst Chris Gardner. "For the enterprises I've talked to, it's not like any of them are completely manual at this stage, but they're all at varying degrees of trying to integrate all these pieces," Gardner said.

This fragmentation was due to a lack of holistic solutions that could connect all aspects of the data center together in the past, Gardner said. "We've started to see a little of it with continuous delivery release automation," he added. "They all will do the testing, the configuration, the rollback, and all that." 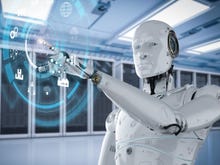 Automation has become a higher priority in many enterprises because of the public cloud pressures staff are facing, Smith said. But even then, progress often occurs in a silo.

"Most every vendor now does understand the importance of automation," Smith said. "I think what's happening now is that many of them are now bringing in machine learning and AI to the actual automation mix, so that in many cases they're trying to make it easier for the actual users."

Enterprises are historically a fairly risk-averse group, said Jeff Fidacaro, a senior analyst at 451 Research. "Data centers tend to be very physical in nature with the power and the cooling," he added. "That tends to get set to design points and left to operate, and they're fairly risk-averse about changing those set points, let alone automating or allowing software to automate controls.

"The key with stakeholders, and particularly the data center operators and CIOs and others at the management level, is to understand that there are certainly ways to increase the efficiency of your data center by using automated controls, without as much perceived risk as they may have," Fidacaro said.

Here are 10 vendors in the data center automation space you should know.

XebiaLabs is a continuous delivery release automation tool, Gardner said. "XebiaLabs has got some really great tools for modeling applications along with infrastructure, which becomes critical because it's not just a matter of deploying it. You also want to know you're doing the right thing with the deployment," Gardner said. "The tool can do cost analysis of releases, as well as rollback changes if bugs are found."

IBM UrbanCode has been an established player in the continuous deployment and release automation space, Gardner said. Its products help deliver software to market faster by accelerating application delivery.

CA Automic has a full suite of applications in this area, Gardner said. "They not only can do a lot of stuff that Media Labs and UrbanCode can do, but they can touch on configuring mainframes, then configuring infrastructure as if it was Modern Infrastructures code," he added. "So that's a benefit for a lot of enterprises that maybe are not fully modernized."

Configuration management tools like Chef, Puppet, and Red Hat Ansible are helpful for organizations that are still settling on what pieces they want to automate, Gardner said. "What I've seen happen is different development and even infrastructure groups kind of stand off their own tools using one of these, but don't make an enterprise-wide initiative and then they have to connect those pieces," Gardner said. "The first step I recommend is settling on a configuration management solution across the board for your enterprise."

Puppet is neck-and-neck with Chef in terms of configuration management, Gardner said: Both are established, and have large community engagement, so enterprise developer teams don't necessarily have to write the code themselves. Both tools are also commonly used in DevOps practices.

Red Hat bought Ansible and poured a large number of resources into the configuration management platform, Gardner said. "It's catching up very quickly," he added.

Microsoft's solutions in this space generally remain the same year to year, Gardner said. "Microsoft has been interesting to watch because they are also putting in a tremendous amount of resources, to manage more than Windows," Gardner said. "Their automation solutions are actually pretty robust, but they're also in a stage where they're iterating on it. But they're not yet caught up to what a Chef or a Puppet can do."

Data Center Infrastructure Management software is designed to control the physical aspects of the power and cooling, and can integrate with other systems, Fidacaro said. Software from Vigilent embeds AI to perform tasks like dynamically changing fan speeds in a cooling unit to adjust for changes, Fidacaro said.

VPS examines workloads to anticipate peak workload utilization and evaluate the available energy resources, Fidacaro said. "A good example for VPS is, when we're going into a peak part of the day for the IT workload, can we shed some of that energy requirement and use the batteries on that uninterruptible power supply to provide the incremental energy needed to meet that workload requirement," he added.

Join Discussion for: Data center automation: 10 vendors you should...