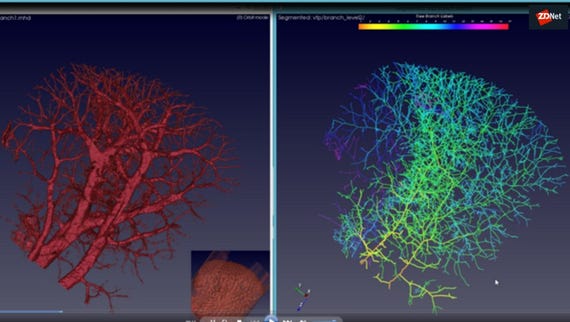 The Commonwealth Scientific and Industrial Research Organisation (CSIRO) has announced that researchers from its Data61 division are developing software that could enable the early detection of malignant tumours.

Specifically, the software tool is being built to detect angiogenesis -- the development of new blood vessels -- which precedes the growth of cancers.

Researchers at Data61 and the Shanghai Institute of Applied Physics at the Chinese Academy of Sciences analysed 26 high-resolution 3D micro-CT images of the brains and livers of 26 mice at various stages of cancer growth and developed an algorithm that generates what CSIRO claims is an accurate geometric representation of blood vessels.

The researchers applied a technique called "end-point constraints" to preserve the geometric features of new blood vessels, including branching patterns and the lengths of terminal vessels.

"The accurate quantification of vasculature changes, particularly the number of terminal vessel branches, can play a critical role in accurate assessment and treatment," CSIRO said.

Data61's new software will enable the monitoring of subtle proliferations in blood vessels over time, providing a better understanding of how patients are responding to anti-angiogenesis treatment.

"The hope is that through improved understanding new opportunities to disrupt angiogenesis will be identified and open pathways to new treatments," Aranda said. "If we can stop cancers spreading we can reduce the number of people who die from the disease."

CSIRO admitted that while the development of this new technique is a "significant step forward", the Shanghai Synchrotron Beamline that was used to produce the micro-CT 3D images of mice organs actually generates radiation levels that are unsafe for human imaging.

As such, researchers are looking for 3D imaging technologies and partnering with a hardware manufacturer that can produce high-resolution images with safe levels of radiation for humans.

Dr Dadong Wang, lead researcher on this project from Data61's Quantitative Imaging team, said that the software being built could be applied in other areas, such as the analysis of 3D neurite outgrowth for drug development.

"While there is great interest in taking these findings further, there is still a long way to go before this new development can be applied to human patients," Wang said. "But we are very hopeful, and currently looking for collaborators and partners to take the technology to the next stage."

This is not the first time CSIRO has looked into cancer detection; in December, the government-backed organisation announced that a new, more accurate blood test to detect bowel cancer recurrence, known as Colvera, had been launched in the United States.

The blood test, which detects cancer-specific chemical changes in fragments of DNA from tumours found circulating in blood, is the result of a collaboration between CSIRO, Flinders University, and Clinical Genomics.

Freenome, a South San Francisco-based liquid biopsy startup that uses a combination of machine learning and biology to detect the cell-free DNA sequencing of cancer before it becomes deadly, has raised $71.2 million to date, $65 million of which was raised in March this year. One of Freenome's investors, Google Ventures, has also backed Freenome competitor Grail.

In January, Grail, a spin-off of the NASDAQ-listed DNA-sequencing giant Illumina, also raised $900 million in a Series B round led by Arch Venture Partners, with contribution from other investors such as Johnson and Johnson's innovation arm.