This is a guest post by Jason Rothman and follows the format of a Q&A (one of my favorite type of posts). Enjoy, and please leave feedback in the comments below.

Matt Hunter developed TextSlide in a weekend (a really intense one). It's a new application that lets people randomly text each other, anonymously, like Chatroulette but without the obscenities.

To use TextSlide, you simply type "#start" and it will match you up with someone. To move on to the next person, you type "#next".

I had a chance to interview Hunter today, who had a few minutes to chat in between text messages.

The Web Life: How did you think of it?

Hunter: Driving back from a trip with my friend Kyle just talking about ideas that would be cool, this idea came up. I decided to create it because I don't have internet or and my phone service sucked. The only thing I could do is text. Being from the east coast, everyone was sleeping. I needed a way to be social. That was it.

Was boredom your inspiration? 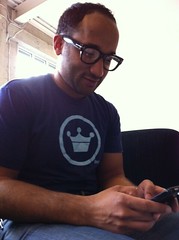 No, it was the desire to communicate. My iPhone and iPad had no service, the only phone that worked was a dumb pre-paid phone I bought to combat SF's service issues.

Have you had to tweak the code much since you created it in a weekend?

Yeah, I had to tweak it to scale. Also, my friends advised me to simplify it. The original code actually had a lot more features.

Some are still there, we just don't talk about them.

How soon are you going to release this on the general public?

Soon... I'm trying to find the sweet spot between anonymity and community.

Is this easily scalable because you are using SMS text as your platform, basically each person’s cell phone company would shoulder the load?

Yes and no. Even text has its limitations.

Do you believe in complete sentences while texting?

No, I prefer emoticons :)

Can you text with one hand without looking at the keyboard like Leonardo diCaprio in that movie The Departed?

Yes, I actually got rid of my blackberry because I texted while I was driving.

How many words per minute can you type on your phone?

Ha! I'm actually a lot faster on my T9 than my iPhone.

Invites: if you are interested in getting early alpha access, email Hunter with one reason why you love texting.