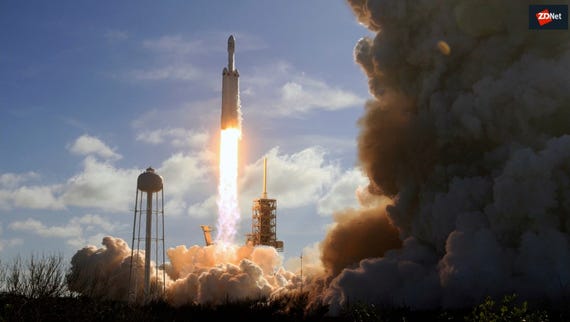 The Monday launch of SpaceX's Falcon 9 rocket from Cape Canaveral Air Force Station, Florida, is one of six more launches required to deliver coverage to North America. It was the second Falcon 9 launch carrying a payload of 60 Starlink satellites.

Elon Musk has said Space X needs about 400 satellites to provide "minor" coverage and 800 for "moderate" coverage of North America.

The rocket company will be able to launch a global Starlink satellite broadband service after 24 additional launches, at which point the North American service is scheduled to be available. With 30 launches, SpaceX would have 1,800 Starlink satellites.

The 60 satellites onboard the Falcon 9 on Monday were released about an hour after liftoff into a 174-mile-high (280km) orbit and then, using the onboard propulsion system, were moved into their operational position. Their orbit is lower than the May batch, which lacked the equipment necessary to create a mesh network.

SpaceX says it has upgraded the design of the satellites since May to increase spectrum capacity and maximize their use of the Ka and Ku bands.

SpaceX promises to provide fast, reliable internet to areas with little or no connectivity, such as poorly served rural communities.

Assuming SpaceX meets its mid-2020 target, it could be ahead of the FCC's $1.98bn Connect America Fund (CAF) II rural broadband program, which ISPs are rolling out over the next 10 years.

According to Microsoft, 162 million people across the US, mostly in rural areas, don't have access to broadband speeds. The FCC estimates that number to be just 21 million.

SEE: Fast, affordable internet from the sky is almost here

SpaceX hasn't determined pricing yet, but one group of consumers it will target are those who currently pay $80 for a poor broadband service, SpaceX chief operating officer Gwynne Shotwell said last month.

SpaceX and the US Air Force Research Laboratory have demonstrated a 610Mbps connection to the cockpit of an inflight US military C-12 twin-engine turboprop aircraft. But the plan is to deliver to 1Gbps per user with low latency, projected to be around 25ms.

SpaceX will also require users to install a "beautiful" user terminal, but it's not known yet whether it will be a standalone device or serve as a cable modem/router.

More on SpaceX and internet-beaming satellites