Microsoft has announced a slew of new security and privacy features for Office 365, in line with its mobile-first, cloud-first strategy recently announced by new CEO Satya Nadella. 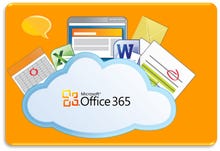 Specifically, Microsoft's Office 365 business customers will see a move from per-disk encryption to a model where every file stored in SharePoint Online and OneDrive for Business has its own encryption key, the company announced at its TechEd North America conference. Updates to existing files will also have their own unique key too.

Microsoft is also putting the mobile device management technologies from Windows InTune (which is part of its Enterprise Mobility Suite) to work in Office 365, offering admins policy-based controls over user access to corporate data in Office documents, OneDrive for Business, and Office Web Apps mobile.

For example, admins could set a policy to allow users to create, view, edit and share content between limited managed applications. Microsoft said it will be launching new managed Office applications for iOS and Android phones later this year.

To support this feature, Microsoft announced a new preview of Azure RemoteApp, which is mean to help IT departments launch remote Office apps for desktop and mobile users, including those on Android, iOS and OS X.

This June, Microsoft will rollout data loss prevention functionality currently available in Exchange to SharePoint Online and OneDrive for Business, but only for Office 365 Enterprise E3 customers. Admins will be able to run queries in the eDiscovery Center to help prevent sensitive information from leaking.

Microsoft is also re-launching its 'Office 365 Trust Center', which will become the company's mouth piece to discuss issues such as data ownership, privacy and compliance.