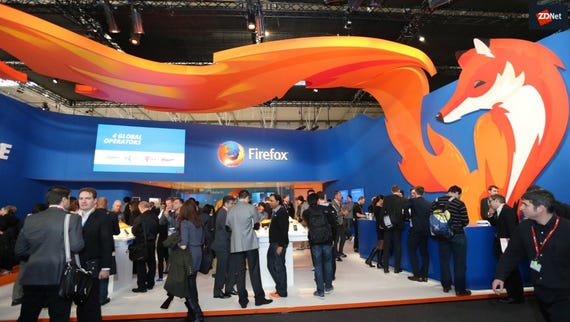 Faster Firefox? Mozilla's Quantum shoots for quicker page loads, smoother scrolling Mozilla is overhauling its Gecko-based web engine so that it's better at handling the dynamic features of modern websites.

Firefox Quantum launched in November 2017 for Android, iOS, Linux, Mac, and Windows users. This latest version arrives more than a decade after Mozilla first released its iconic Firefox browser. Mozilla said Firefox Quantum is designed to be twice as fast as its Firefox predecessor from last year -- while using 30 percent less computer memory than the Chrome browser.

That's great marketing speak, but is Firefox Quantum truly better than Google's rival browser? If you'd like to learn about what types of updates Firefox Quantum brings to the table, or how these two top-tier browsers stack up, we've broken out all the stats and features worth paying attention to, with the hopes of helping you figure out which is browser is better.

What are Firefox Quantum and Chrome's market shares?

In December 2017, just one month after Firefox Quantum's release to the public, Mozilla announced there have been 44 percent more downloads from Chrome users compared with this time last year. On Android and iOS devices, specifically, Firefox installations spiked 24 percent.

Started at the bottom

It's important to put that information into context: First, when Chrome debuted in 2008, it quickly become the de-facto web browser of choice. Before then, it seemed like everyone was using Firefox as an alternative to Microsoft's Internet Explorer or Apple's Safari. Chrome made Firefox irrelevant -- a stigma that's only now starting to reverse course. According to the Digital Analytics Program, in January 2017, Chrome dominated US web browser use (with 44.5 percent market share), followed by Safari (with 25.4 percent) and Internet Explorer (with 15.5 percent market share). Firefox tumbled to fourth place (with 7.4 percent).

Yet, a month after the launch of Quantum Firefox, Mozilla confirmed a total of 170 million people have installed the new browser, which lets you open over 1,500 tabs in mere seconds.

Read also: Chrome is the most popular web browser of all

Before we get any deeper into Firefox Quantum, you should know that it is technically called version 57 of the Firefox browser. The "Quantum" name comes from the project that turned Firefox into what it is now -- but the name has stuck. Everyone says it, so we will, too.

Underneath the redesigned interface is a new browsing engine, born from the Quantum project, along with new multiprocessing technology that Mozilla has built for the browser. Firefox Quantum also features an AMD VP9 hardware video encoder that helps to reduce battery consumption by cutting background tabs' video decoding. The result is a browser that is lean yet built for multi-tasking multiple tabs with 86-percent less hang time - all while using less RAM than Chrome. You can run 3D games at near-native speeds and browse confidently knowing Firefox is using enough memory to let you work while leaving plenty of memory to keep your computer responsive. Firefox uses 1.77 times less memory than Chrome, Mozilla said.

We all want a browser that feels fast and lean, but we also want one that looks great. Luckily, Firefox Quantum doesn't disappoint. You'll immediately see visual changes throughout the browser -- whether looking at its toolbar icons, Settings menu, New Tab page, etc. It makes Chrome feel dated. If, for whatever reason, you don't like the new look, Firefox Quantum lets you customize it to suit your preferences. You can move all the buttons, change all the colors and fonts, and even control the visual density of the browser. You can also choose from thousands of themes. Check out some of the available themes here.

Firefox Quantum comes loaded with nifty tricks. Like Chrome, it has a built-in QR code reader and a menu item for copying a URL. Firefox Quantum even streamlined screenshotting: You can capture a section, everything on your screen, or the entire webpage all at once. You can even turn on "Night Mode" to invert the browser's colors. You can also install extensions and add-ons, sync the browser and share open tabs across mobile, desktop, or tablet, manage your passwords and even give your computer a master password for extra security, and browse privately.

Mozilla bills Firefox Quantum as an open-source browser that doesn't sell access to your online data and lets you opt-in to privacy so you can freely browse. With Private Mode, for instance, Firefox Quantum can actively block unwanted content, including ads, analytics trackers, and share buttons for social media that may record your behavior without your explicit permission.

How does Chrome compare?

Both browsers have been put through synthetic benchmark tests by several sites, including ZDNet, and in most of these cases, the latest version of Firefox beats Chrome, especially in regards to advanced workloads and programming techniques. In our test, we noted the results show there's been a lot of effort put into Firefox's performance over the past year. However, we also couldn't feel too much of a speed difference -- and that's hardly a surprise, given how fast modern browsers have become and how the gap between them has narrowed.

If you want to know more more about Chrome and the technical details behind its speed, like WebKit, V8 JavaScript engine, and more, check out this comic book Google made. It explains everything you need to know, complete with illustrations. Those of you who want to know even more, like the inner workings of DNS pre-resolution or DOM bindings, Google has technical videos here. It's all a bit geeky, but the information is there.

That said, Mozilla released its own promotional video that directly compares both browsers. It tested page loading times for 10 of the most popular websites. In each instance, Firefox Quantum was twice as fast as the Chrome browser. You can check the entire video here.

It feels like Chrome has looked the same for years -- despite Google's Material Design efforts. So, if you're feeling a little tired of Chrome's look, too, you might be charmed by Firefox Quantum's sharp "Photon" interface. Just don't expect a jaw-dropping new browsing experience -- it's still just a web browser. In fact, Firefox Quantum looks a lot like Chrome. Rather than separate the search bar and address bar, it combines them, just like Chrome, and tabs across both browsers are rectangular and simple. Plus, we have to give credit where it's due: Firefox Quantum isn't the only web browser available with its own theme store for customization. You can just as easily go browse thousands of themes available for Chrome, from here.

Google has always tried to pitch Chrome as a secure browser. It has built-in malware and phishing detection, thanks to sandboxing and safe browsing technology, as well as auto updates that bring security fixes. It also has several privacy tools at your disposal. For instance, like Firefox Quantum's Private Mode, Chrome has something called an Incognito mode. It mostly auto-deletes cookies instead of auto-block ads that track. But, with Chrome, you can customize some preferences by website, including permanently mute autoplaying video ads, a move that should make your web-browsing experience much less interruptive.

Finally, Chrome also lets you just sign in to immediately access your synced bookmarks, history, and other settings from any device. Also, similar to Firefox Quantum, it has add-ons and extensions, as well as the Chrome Web Store for finding all these installable goodies.

Is it worth getting used to a new browser when they might seem to be roughly equal competitors?

Putting aside design (since that's all subjective), it comes down to speed and features when pitting Firefox Quantum and Chrome against each other. As we said earlier, a lot of the data seems to suggest Firefox Quantum is faster, but some synthetic benchmark tests do indicate this is negligible in the real world. In other words, the two browsers might feel equally fast, but they shouldn't be equally as intensive on your machine. A couple dozen Chrome tabs can bring even the most spec'd-out consumer computer to a halt, while in Firefox Quantum, in our experience, you can have 30 to 40 tabs open and not feel a bit of lag.

It's something worth testing yourself, because Americans spend more than 10 hours a day looking at a screen, per Nielsen research. If that's you, and the bulk of those hours are on a web browser, you really should be using the speediest, most efficient browser, even if that means having to get used to a whole new one.

Which browser would work best for which type of person and why?

Chrome may have won the browser wars way back when, but as history has shown, it's possible to lose your crown. While Chrome has been comfortably hitting the snooze button for the past couple years, Firefox quantum-leaped ahead (see what we did there?).

Also, ultimately, switching browsers is a pain. There's a learning curve, if not a behavioral one. But, as far we can tell, there is not much you can do in Chrome that you can't do in Firefox Quantum. It's therefore difficult to say what type of person should use which browser. You really need to think about whether you're married to Google's ecosystem, whether Chrome is currently a hog on your system, and whether you're even willing to explore another option. Answer those essential questions -- and you'll know which browser is better, or at least best for you.

Think Firefox Quantum is fast? Try Firefox 58, out this week

Join Discussion for: Firefox Quantum vs Chrome: Are the tides...