Asus doesn't do itself many favours by having a tablet naming system that the average punter might find confusing.

Putting a number in the name to indicate screen size is no bad thing. It tells you immediately, for example, that the Asus MeMO Pad 7 (ME176CX) has a seven-inch screen. But that bit in brackets? Well, there was a MeMO Pad 7 last year, and there are four current seven-inch tablets listed at the Asus UK website, three of which have '7' in their name. One says it is HD, and the other two have part of their name in brackets. Go figure.

The naming might be a complete pig's ear, but the tablet itself is a stunner. For £119 including VAT, you get all the tablet you could wish for considering the price.

The MeMO Pad 7 (ME176CX) comes with a range of coloured backplates which coordinate with an Asus-made cover, of course. Black, white, turquoise, red, and the very nice yellow I was sent. If the other finishes are similar to the pearlescent on my yellow, then they'll all be quite eye-catching.

This new Asus seven-inch model is lighter than its predecessor at 295g and thin at 9.6mm. It is 26 percent slimmer than the predecessor Asus 7 too. The Asus made Nexus 7 heritage is obvious: this MeMO Pad 7 is considerably shorter than the Nexus but the general design is startlingly similar.

The front camera is located to the top right of the screen, the volume and power buttons are embedded in the upper right of the wraparound backplate — transposed here from their orientation in the Nexus so that volume is beneath power. 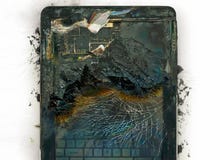 There are differences. Where the Nexus has its microUSB power cable on the bottom of the chassis here it is on the top next to the headset slot, and where the Nexus internal memory is not expandable, the 10.98GB of free storage space — from 16GB installed — can be augmented and the microSD card slot is on the upper left of the chassis.

Stepping away from the usual suspects, Asus has opted for a quad core 1.86GHz Intel Atom Z3745 processor and supports this with 1GB of RAM. I found it perfectly adequate for everyday use.

The screen's 1,280 x 800 pixels make text perfectly readable though if you look closely you can see a certain fuzziness and it is a long way from state of the art. Still, the Asus Splendid app lets you play with colour hue and saturation taking the colours down to monochrome if you wish. It's an app Asus uses across the board now, and it is quite useful.

The five megapixel back and two megapixel front cameras may not excite in terms of megapixels, and you will need a steady hand to avoid blurred images. It is trendy to include some fancy camera features and Asus has a couple in its repertoire. One is something it calls Time Rewind — select this and images are recorded for two seconds before and one second after you hit the shutter button. The resulting 31 images can be wound through using a dial pad on screen and you can pick which one you want to keep. I might prefer to view all 31 images individually, but that doesn't seem possible.

Android 4.4 is augmented by the Asus skin, called ZenUI. This gives Android's icons a flatter look, and overall Asus claims ZenUI provides more than 200 'upgrades and enhancements' to the standard Android operating system.

Asus is quite proud of Do It Later, a time management utility which lets you capture stuff from across the device into a 'do it later' area, and of What's Next, a Calendar based reminder which keeps you up to date with upcoming tasks. It places a timeline on the lock screen so you can get a snap view of the next few hours of your day and has a screen widget too.

Overall, the MeMO Pad 7 (ME176CX) is an attractive proposition. Screen resolution will be an issue for some — the £199 Nexus 7 16GB has 1,900 x 1,200 pixels, for example — but if you are looking for low cost efficiency this would be a good direction in which to glance.