FlipShare 5.0 software and a wifi device that delivers the flip videos on your computer hard drive to your TV screen are announced today by Cisco (see my Flip Ultra HD video above for a quick look at how the latter works).
Written by Oliver Marks, Contributor on Dec. 1, 2009

FlipShare 5.0 software and a wifi device that delivers the flip videos on your computer hard drive to your TV screen are announced today by Cisco (see my Flip Ultra HD video above for a quick look at how the latter works). We think of disruption as being a software and media term, but the Flip camera's ascendancy to the top of the camcorder charts has been pretty astounding.

Digital video accumulates pretty quickly on your computers - you'll quickly fill up hard drives - so having a Flickr style archiving solution is pretty attractive. With the FlipShare 5.0 software Cisco are allowing you to upload your video in your own 'channels' which you can then choose to share with other viewers by granting access to them.

Pure Digital Technologies was snapped up by Cisco in March 2009: they originally launched their reusable video camera in May 2006 after their disposable video cameras, marketed through the CVS drugstore chain, proved very popular. From those beginnings they've rapidly transformed the camcorder market, selling over 2.5 million units and running a close second to Sony in terms of volume.

All those Flip cameras are producing prodigious amounts of digital data, with over 10 million videos shared so far. You can hook up a Flip camera to a TV with an HDMI cable but that's limited to what's on the camera.

With the $150 msrp TV device you can settle back on your couch and watch the archived Flip video contents on whichever computer you plug the wifi dongle into, so your friend with a laptop of skateboarding videos could entertain the room with their footage for a while, then Mary could share the contents of her laptop's saved video footage of her recent road trip. It enables a more sit back on the couch, less nerdy intuitive audio visual experience. 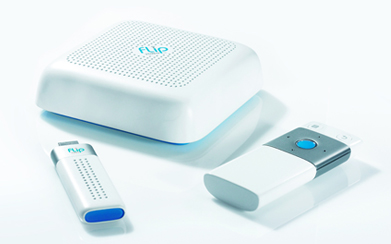 In addition to being able to plug your Flip video camera into your usb port and upload to Facebook, YouTube and MySpace the new FlipShare 5.0 software offers instant video sharing to smart phones with the introduction of the FlipShare mobile app for iPhone, Blackberry™ and Android™ devices.

The maturing of the Flip channels concept is of interest from a business perspective: while the popular concept of Flip video is encapsulated in Cisco's 'Do You Flip?' TV campaign - all dancing snowmen and skateboarding - the cameras and shared footage are an important component of collaboration.

From recording and archiving business meetings and presentations to attaching Flip cameras to machinery to trouble shoot, and more entertainingly to race cars to monitor performance - there is a wide variety of uses for sharing footage.

The Flip range is heavily marketed towards consumers - and Cisco claim is a top three youth brand along with Apple and the Wii - but the use cases and price points make all aspects of the product range very useful business collaboration tools also.