The new Gmail will just be Gmail soon after it reaches general availability.
Written by Liam Tung, Contributor on June 5, 2018 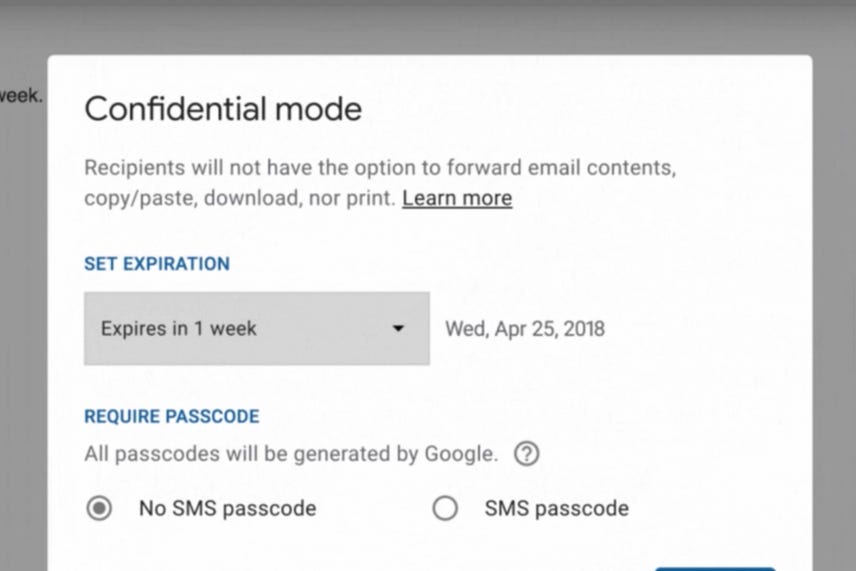 The newly designed Gmail has been an option for Gmail users for the past month but soon it will be the only choice.

Until now, consumer Gmail users have had the option to 'Try the new Gmail', while G Suite admins have been able to let parts or all of an organization try it through Google's Early Adopter Program.

TechRepublic: How to use Confidential Mode in Gmail | CNET: 7 Gmail tips every emailer should know | Also: The 2018 ultimate guide to Gmail backup

But in July the new Gmail will move to general availability and G Suite users will gradually lose the option to opt out of the new design. Presumably this change will also apply to Gmail users around the same timeframe.

G Suite admins will have three choices for rolling out the new Gmail to their users, according to Google's timeline for the new Gmail.

Admins can immediately transition their users to the new Gmail, and users will still have the choice to opt out for a limited time.

From there, gradually all G Suite users will be transitioned to the new Gmail across two phases. About two months after July, all users who aren't on the new Gmail will be pushed across automatically, but they'll be able to opt out for the next four weeks.

Three months after July, around October, anyone who opted out of the new Gmail will be bumped across once again and the choice to opt out disappears. The opt-out will also no longer be available to users who've moved to the new Gmail already.

Features of the new Gmail such as offline and confidential mode will be off by default when the new version reaches general availability in July.

Google's Gmail update was focused on AI-powered productivity improvements, such as suggested replies, as well as collaboration, and security. It also integrated Calendar, Tasks, Keep, and Add-ons to enable use of these apps from within Gmail.

Google plans to provide further transitions in details in July but is encouraging admins to start testing it with users now.

Here is everything that's new in Gmail -- plus when and how you can try it.

Everything you need to know about Gmail's new features TechRepublic

Productivity
How can I keep junk email out of my inbox without juggling two or more email accounts? [Ask ZDNet]