Shares of Gogo tanked nearly 40 percent in early trading on Tuesday, following a report that American Airlines is suing to drop the internet service provider from its flights.

Star Telegram reports American Airlines has filed suit against Gogo in a Texas court, seeking a contract change as it wants to move to a better competitor.

"After carefully evaluating the new technology and services in the marketplace, American has decided to exercise its rights under the Agreement and recently notified Gogo that ViaSat offers an in-flight connectivity system that materially improves on Gogo's air-to-ground system," the suit says.

A source within Gogo tells ZDNet that the technology American wants to replace is only found on 200 of its 800 flight fleet. Gogo will be submitting a competing proposal to install its latest satellite technology - 2Ku - on this fleet. 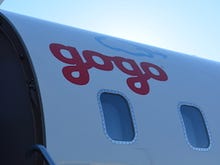 Gogo unveils in-flight text, talk service at 30,000 feet The in-flight technology giant's latest trick allows you to text and talk as though you were on the ground. ZDNet boarded Gogo's private jet to find out more.

"American continually evaluates in-flight connectivity service to determine what best meets our customers' needs and wants," American said in a statement on Monday. "We've notified Gogo of a competitor's offering, and we will evaluate all of our options."

American currently uses Gogo for its regional aircraft and on domestic flights, primarily Boeing 737s, to beam Internet to users for a price.

Join Discussion for: American Airlines wants to switch from Gogo...