The app has been designed to help countries dealing with economic issues and cash woes.
Written by Charlie Osborne, Contributor on Sept. 18, 2017 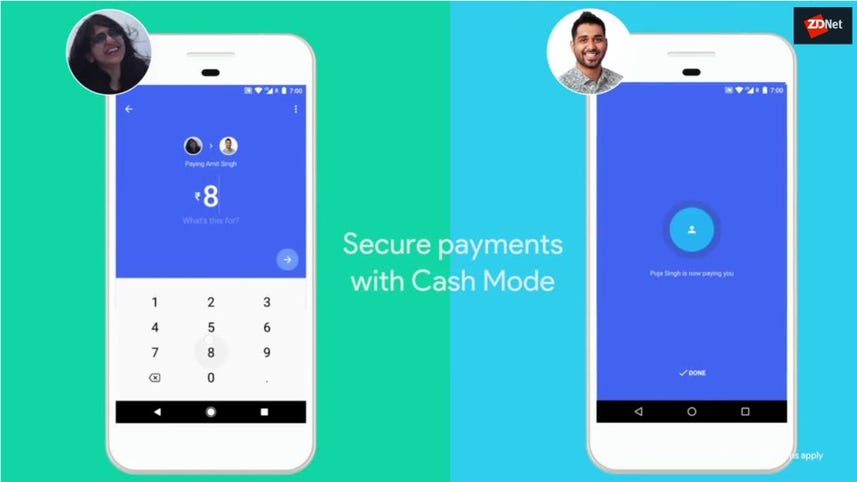 Google has announced the release of Tez, a mobile app designed to replace cash as a quick and easy method of payment.

On Monday, the tech giant said on the Google Asia blog that Tez is a "simple and secure way to pay for things, big and small, online and offline."

According to Caesar Sengupta, VP of the Google Next Billion Users team, the app has been developed with Indian users in mind.

India's cash and underground economy has been hit a harsh blow in recent months. Many workers in the country rely on cash-in-hand work and cash-only payments in small amounts, but the country's government, led by Prime Minister Narendra Modi, took the controversial step last year to ban 500 rupee ($7.50) and 1,000 rupee ($15) notes, which made up roughly 86 percent of all cash in circulation at the time in India.

The government said the move was made to crack down on income tax avoiders, but for the majority of the population, the changes caused utter chaos.

This is where Google comes in. As India is such a cash-reliant economy, an app to replace this would need to be as easy to use as paper switching hands.

Google says that in order to "make digital payments truly work for India" the product must be able to "compete with cash."

Based on the country's Unified Payments Interface (UPI) standard, Tez allows instant transfers of cash to and from bank accounts, as well as a "business" mode for small and larger companies in the country to take advantage of the payment system.

There is also a "Cash Mode" for local transactions which do not share user bank account details or phone numbers between Tez users which is potentially suitable for small shop purchases and general payments.

In order to use this mode, users can bump their smartphones together, request payment, and enter a PIN to transfer funds from one account to another.

"Cash Mode is built using our proprietary AQR (Audio QR) technology, which is similar to QR codes but more convenient and more secure," the Google executive says. "And unlike NFC, it works on almost any smartphone in India, whether Android or iOS."

Google has also introduced a feature called "Tez Shield" which is used for user verification, fraud prevention, and to push back against attempts to compromise user accounts.

Tez is now available for Android and iOS devices. The app works with all 55 banks in the country on UPI, and there are no subscription costs to use the software. In total, up to 20 transactions can be made per day.

"We hope you'll like our fresh approach to digital payments and commerce and that Tez will help make your life a little bit easier," says Sengupta. "This is just one step in a long and important journey towards enabling a cashless India -- a crucial component of a Digital India."