Announcements from Google event in India include giving villages in India access to Wi-Fi connectivity for the first time and a chance to call Google Assistant on a toll-free number.
Written by Aimee Chanthadavong on Sept. 19, 2019 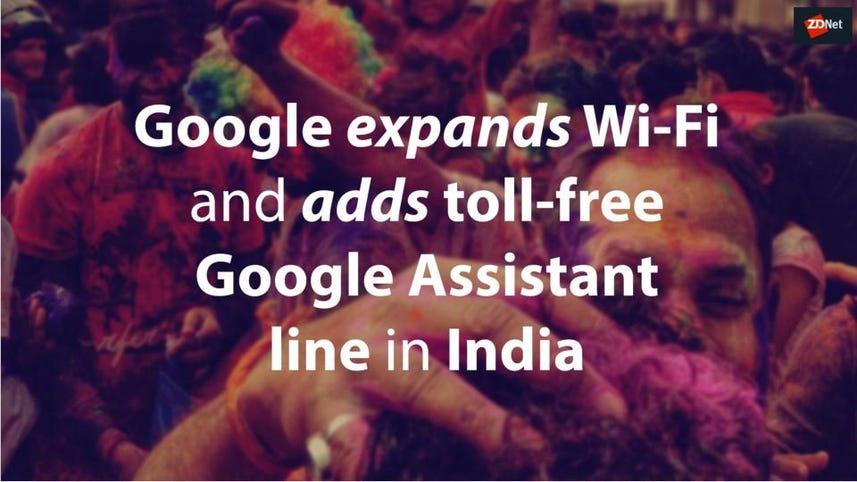 Google has announced a slew of new initiatives aimed to make the internet more accessible for individuals and businesses in India, including giving villages access to Wi-Fi for the first time and a chance to call Google Assistant on a toll-free number.

In addition, Google, together with Vodafone and Idea, have announced a new phone service -- known as the Vodafone-Idea Phone Line --- to enable users, who either have a Vodafone or Idea connection but do not have access to a smartphone or smart device, to call a toll-free number at any time to ask Google Assistant a question in either English or Hindi.

During the company's event in India, the Spot platform within the Google Pay app was also launched. The platform is designed to allow businesses to sell products and services within Google Pay, without need to create a website or app.

"[It's] way for businesses to create experiences and engage their customers within the Google Pay app," Google general manager and VP of payments and next billion users Caesar Sengupta wrote in a blog post.

In further moves to support local businesses, Google also boasted about its new app called Google Pay for Business to allow merchants in India to accept online payments, without the need for a point-of-sale system.

Separately, Google has launched an artificial intelligence (AI) lab in Bangalore to carry out research into AI with the local research communication and using the research to apply it solve problems in industries such as healthcare, agriculture, and education.

The lab, known as Google Research India, will be led by computer scientist and fellow of the Association for Computing Machinery Manish Gupta.

"The lab in Bangalore will be part of and support Google's global network of researchers: participating in conferences, publishing research in scientific papers, and collaborating closely with one another," said Google AI vice president Jay Yagnik wrote in a blog post.

India was the first country outside of the United States that Google opened a campus.