After years of uncertainty about who the Hangouts comms platform was aimed at, Google has decided it's definitely for the enterprise, launching two team-focused Hangouts apps, Meet and Chat.

The apps, announced by Google on Thursday, split Hangouts' functionality into distinct video and chat products. While Meet takes on Hangouts' video-conferencing features, Chats is a dedicated messaging app for teams.

The new apps may help straighten out Google's historically confusing strategy on messaging, both within Hangouts features and other messaging apps with overlapping capabilities.

Google has been working on resolving this situation. The company revealed at the launch of its consumer apps, Duo and Allo, that Hangouts in future would be developed for business users with a focus on group collaboration and enterprise productivity.

While Hangouts wasn't received well by consumers, it did have better success in the enterprise due to its integration with Google's Apps suite, such as Gmail, Drive and Calendar, according to Google.

The company reiterated its plan to focus Hangouts on "enterprise use cases" when it announced in January that it was retiring the Google+ Hangouts API, cutting off third-party consumer apps that integrated with it.

The new Meet app lets up to 30 people join a video conference, compared with a Hangouts cap of 10 participants. To start a meeting, users share a link with participants who can join from that link or from Calendar.

The Hangouts Chat for group messaging is Google's take on Slack, which Microsoft is also aiming for with its Teams app that launches next week. It's currently available through Google's early-adopter program.

Chat also features the @meet chatbot to help schedule team meetings with Hangouts Meet and Google Calendar. The bot can, for example, check participants' calendars and select a slot that's free for everyone.

Google is also allowing third-party applications to integrate with the Chat app. Early partners include Asana, Box, Prosperworks and Zendesk. 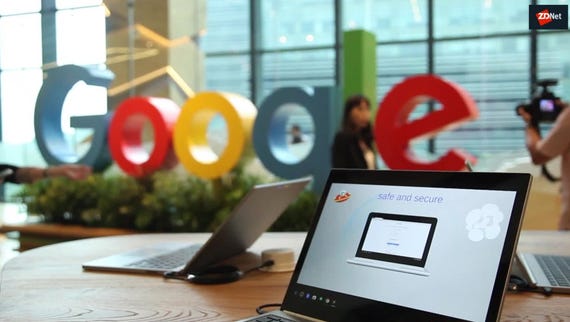 Join Discussion for: Google's big Hangouts revamp: Now you get...