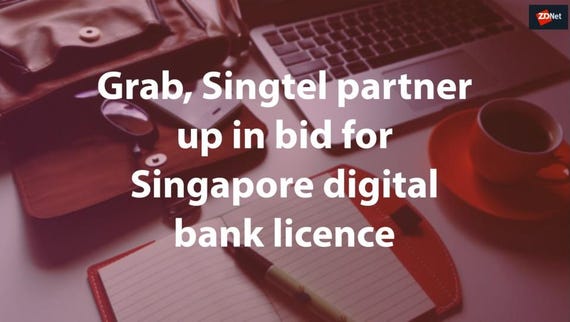 Grab and Singtel have teamed up in a bid to snag one of a handful of digital bank licences to be issued in Singapore, where the ride-sharing operator and telco will be looking to target "digital-first" consumers and small and midsize businesses (SMBs). The two partners plan to form a joint entity, with Grab owning a 60% stake.

This new "consortium" would offer products and services to address the "unmet and underserved" needs of consumers and enterprises in the city-state, said Grab and Singtel in a joint statement Monday.

Singapore in June unveiled plans to issue up to five digital bank licenses as part of efforts to add market diversity and boost the local banking system. The Monetary Authority of Singapore (MAS) said this would include two digital full bank licenses, allowing licensees to offer financial services and take deposits from retail customers, and up to three digital wholesale bank licenses, which would enable licensees to serve SMBs and other non-retail segments.

In their statement, Grab and Singtel said both companies already offered their own financial services, including Singtel's Dash and VIA and Grab's GrabPay and GrabInsure. Touting their fintech expertise and digital capabilities, they said the joint entity was "primed" to create a digital-first banking model that affordable and accessible.

"The digital bank will aim to cater to the needs of digital-first consumers, who have come to expect greater convenience and personalisation, and SMBs that cite lack of access to credit as a key pain-point," they said.

Asked whether Grab and Singtel planned to jointly develop new products or integrate their existing financial offerings, a spokesperson told ZDNet: "We can't speak to any specifics around products and services at this stage as we are pending MAS's decision on approval."

He said in an email that the partners would each invest an amount that was proportionate to their share in the consortium, but did not provide details on how much this would be. He added that the consortium compromised just the two companies and was established to apply for the digital full bank licence.

According to MAS, only companies headquartered in Singapore and controlled by Singaporeans were eligible to apply for digital full bank licenses. Digital full bank applicants would have to meet three key criteria including a track record in operating an existing business, in their respective technology or e-commerce fields, and a value proposition detailing how it could serve existing unmet or underserved needs.

Application for digital wholesale bank licences would be open to all companies, but applicants also would need to meet the same eligibility criteria as digital full banks. In addition, digital wholesale bank licensees must be locally incorporated and submit a viable exit plan during the application stage. They also would need a minimum paid-up capital of S$100 million.

In a recent report, Forrester said the introduction of digital banks would "shake up" Singapore's banking industry, where 70% of online consumers performed banking activities on a smartphone. The research firm's senior analyst for e-business and channel strategy Zhi-Ying Barry said consumers could expect banks to deliver beyond basic services such as money transfers to offer better management tools to support the customers' financial posture.

She added that digital banks would pose a challenge to incumbents by working to better serve SMBs, noting that traditional banks in Singapore and worldwide had failed to keep pace with these businesses' changing requirements and increasing demands for banking services.

Digital market players, however, would need to resolve several key challenges, such as ensuring they had a clear path to business sustainability. Barry said: "While they need scale to achieve profitability, they can't sustain large marketing campaigns, so the key to survival is acquiring new customers efficiently. For this to happen, they need to win customer trust, drive advocacy, and convert customers to a primary relationship."

Grab Financial Group's senior director Reuben Lai said the company in the last couple of years had introduced and expanded its financial services portfolio to include e-money, loans, and insurance. Through the Singtel partnership, Lai said Grab hoped to provide "a more bespoke service experience" that better empowered customers to grow and manage their financial needs.

Singtel Internet Group CEO Arthur Lang added: "Together with Grab, which has extensive digital expertise and experience in this region, we have a formidable set of assets and significant synergies to make banking more accessible and intuitive, and deliver much-needed product simplicity, speed, and affordability."

Move to issue up to five new digital bank licenses will add market diversity and boost the local banking system in Singapore's bid to become a digital economy, says industry regulator, which will begin reviewing applicants in August.

Monetary Authority of Singapore is dishing out S$30 million (US$21.88 million) in a new grant to help local financial institutions boost their cybersecurity operations and skillsets, funding up to half of such expenses.

Originally scheduled to come into effect at the end of January, e-payment user protection guidelines will now be rolled out on June 30, after industry regulator Monetary Authority of Singapore agrees to give local banks more time to implement the necessary support systems.

Join Discussion for: Grab, Singtel partner up in bid for Singapore...