In a statement on its website, the CCC confirmed that the bypass had taken place, adding: "A fingerprint of the phone user, photographed from a glass surface, was enough to create a fake finger that could unlock an iPhone 5s secured with Touch ID."

The video posted online on Sunday shows one user enrolling their finger, while later accessing the device using a different finger with a high-resolution latex or wood glue cast. The group detailed in a blog post how it accessed the device using a fake print by photographing a fingerprint and converting it.

"Apple's sensor has just a higher resolution compared to the sensors so far," said CCC spokesperson Frank Rieger on the group's website. "So we only needed to ramp up the resolution of our fake."

The Chaos Computer Club is one of the longest-running hacking groups in the world. The CCC produces the world's oldest hacking conference, and this year will celebrate its 30th gathering ("30C3") in Hamburg, Germany, in December.

Nick Depetrillo, who spoke to ZDNet on the phone on Sunday, explained how he set up a fingerprint reader bypass bounty as "putting my money where my mouth is." He submitting $100 of his own money into the crowdsourced pot.

Working in conjunction with cybersecurity expert Robert Graham, who added $500 out of his own pocket to the mix, the two set up the website istouchidhackedyet.com, which catalogs those who pledge money to cracking the iPhone 5s' security feature. 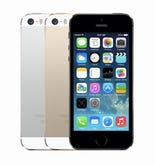 Just as Apple's iPhone 5S is about get into the hands of consumers, hackers offer a growing bounty to whoever hacks Apple's fingerprint scanner. UPDATED.

The website has been updated with a "Maybe!" message, confirming that a submission has been made by the hacker group, but noted that verification is still pending. To win the bounty, security researchers must video the lifting of a print, "like from a beer mug," and show it unlocking the phone, the website states.

Describing the collective bounty as an "honor system," Depetrillo's website has cataloged thousands of dollars in cash (and hundreds of dollars escrowed by independent law firm CipherLaw), numerous bottles of liquor, a book of erotica, and even an iPhone 5c.

But according to ZDNet's Violet Blue, who covered this story earlier in September, some are exploiting the high-profile bounty in a bid to generate press attention. One venture capitalist, who was understood to have contributed $10,000 to the bounty — though they declined to add it to a secure escrow account — reportedly misrepresented the project and spoke for the crowdsourced project "at every press opportunity."

Many major news outlets as a result mistakenly attributed the project to the venture capitalist and not Depetrillo and Graham.

Depetrillo explained that he, along with Graham, will review and judge the verification process.

"The Chaos Computer Club [or any other submitter] will need to show us a complete video, documentation, and walkthrough lifting the print, re-creating the print, and having one human enrol their finger and another human somehow unlock that phone using the first person's print," he said.

Depetrillo confirmed that there have been no other submissions yet, but noted that he has a "lot of respect for the CCC." He told ZDNet that he was "not surprised" when the hacker group appeared to be the first to submit a possible solution.

"We want to convince everybody, not just ourselves, so that others could accept it as such. And everyone is free to debate it — and disagree with it. But if we believe there is a winner, we will hand over our promised money."

Depetrillo said this is a one-time bounty on his part, but noted that others are welcome to start their own crowdsourced efforts for any additional hacks or bypasses.