Full Bio
Posted in Between the Lines on November 22, 2017 | Topic: Internet of Things 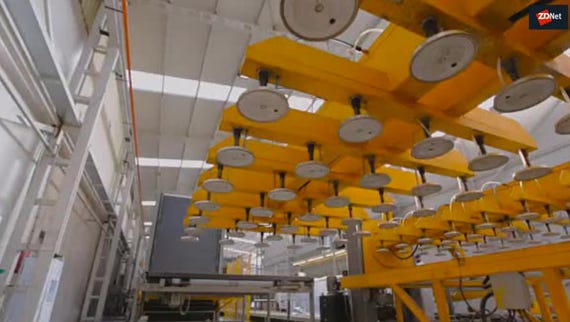 Already shaking up finance, blockchain could upend how manufacturing is run
Watch Now

Blockchain technologies have the potential to radically change the face of manufacturing, according to Syncron.

Blockchain, most commonly associated with cryptocurrencies such as Bitcoin, is a digital ledger technology which can be used to store and record transactions.

As records along the chain are stored and distributed across nodes in the network, it is very difficult to falsify records, making the blockchain a more secure and transparent way to record transactions and service records. This, in turn, gives blockchain applications outside of cryptocurrency exchanges.

The enterprise is exploring ways to utilize blockchain technologies in everything from finance to manufacturing.

IBM Blockchain is available to refine the supply chain and improve identity and data management, Blockchain Foundry focuses on blockchain-based services for prototypes and production in manufacturing applications, BigchainDB offers scalable blockchain services and Chain touts a blockchain platform for financial services, among others.

These are only a few of the options available to the enterprise and different industries, and despite the technology being relatively unknown, the potential of blockchain is likely to attract even more interest in the future.

In an interview with ZDNet, Gary Brooks, Chief Marketing Officer of global manufacturing and supply chain technology company Syncron said blockchain is of particular interest to the manufacturing industry due to its benefits regarding verification and transparency.

"Manufacturers' supply chains are sophisticated, complex organizations with a number of nuances that can make transparency and accountability challenging -- especially when it comes to the logistics of building and shipping new equipment and service parts," Brooks said. "This is particularly true as manufacturers shift from a transactional, break-fix model of after sale service -- where a service part is replaced after it has already failed -- to a subscription-based model that focuses on maximizing product uptime."

"In this case, manufacturers leverage IoT and predictive analytics in their service parts supply chain to proactively repair equipment before it ever breaks down," the executive added. "Blockchain can provide an increased level of visibility into this process, as it would allow an entire global service supply chain to see when and where parts are moving to ensure the repair is made just in time."

As data held within a blockchain is decentralized and shared across nodes, the technology can be used to create and maintain a shared and continually-reconciled database.

Whether an enterprise or SMB, companies can use this to increase transparency, recognize issues within a supply chain, and streamline industrial processes.

As an example, an automaker which releases a vehicle containing faulty parts -- resulting in costly recalls and repairs -- can use the blockchain to trace the supplier of the faulty parts more efficiently, containing the issue and reducing time and labor costs.

"With a blockchain solution, manufacturers now have a living dossier of activity logs and more so they can keep tabs on the flow of goods between companies," Brooks said. "This provides an extra level of transparency and control -- and will enable large manufacturers to compete and win against the competition."

When Chipotle had an E. coli outbreak in 2015, the food chain had serious trouble tracing the source of the bacteria through suppliers. As finding the source was incredibly difficult, Chipotle was unable to immediately stop the spread of contamination.

According to Brooks, blockchain could hold the key for similar issues to be resolved and eradicated quickly.

"For manufacturers specifically, blockchain could help mitigate similar risks," the executive noted. "Multiple parts and pieces comprise large pieces of equipment, and with networks and suppliers around the world, blockchain provides a way to see every part in the supply chain in real-time -- and identify problems before they become widespread."

However, running headlong into this technology contains risk. Manufacturers and companies at large have to decide whether overhauling existing infrastructure and legacy systems to utilize blockchain will result in value and a return on investment; otherwise, blockchain solutions could be a costly endeavor.

When it comes to manufacturers, in particular, they often have long upgrade cycles and in some cases, would most likely need to modernize existing IT processes before even considering such a new technology -- which is still within its infancy and being developed for industrial applications.

"Although blockchain is certainly becoming more mainstream in business, it's still a relatively nascent technology," Brooks said. "This means that many IT teams are having to research the technology in order to gain the knowledge and experience necessary to deploy it successfully."

According to the executive, customer expectation is going to be one of the catalysts for blockchain adoption. When quick, reliable service is expected and required to retain customer loyalty, manufacturers need to invest in new technologies to stay ahead -- or with -- the competition.

Blockchain technologies have the potential to radically change manufacturing supply chains, and with them, cut out the middleman, streamline processes, and improve security on the whole -- as well as simplify data management.

"Blockchain is one of many emerging technologies that's redefining the way companies do business," Brooks said. "The technology itself, in terms of development, regulation, and governance, and adoption is still evolving."

"However, as blockchain's innovation and the technology itself becomes more defined, the supply chain (and service supply chain, in particular) could begin seeing truer forms of transparency, accountability, and efficiency than it's ever seen before," the executive added. "Manufacturers that take calculated risks and adopt new business practices and technologies to move beyond the status quo will be the ones that win."

Join Discussion for: How blockchain can transform the manufacturing...