My return periods for both the HTC One M9 and Samsung Galaxy S6 Edge have now both expired. The primary phone occupying my pocket is not either one of these Android smartphones, it's the Apple iPhone 6 Plus.

It was my intention to keep the Galaxy S6 Edge, but since I wasn't quite 100 percent sure I initiated the return prior to last Friday. The phone was sent back to T-Mobile yesterday. 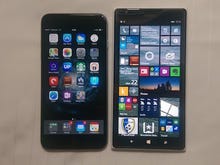 After another week of daily usage I could not justify the $925+ price (includes sales tax) when the battery dies daily at about 3 pm, it was constantly hot in my pocket with the display and WiFi off, switching between and launching apps was accompanied by blank white loading screens, and the glare from lights on both edges takes away from the viewing experience.

Some of my issues may be due to T-Mobile's software, in particular cellular radio battery drain that seems to be associated with VoLTE and WiFi Calling. I could have lived with a few of the issues, hoping that software fixes would eventually be released, but I've been spoiled by the batteries found in the Apple iPhone 6 Plus, BlackBerry Passport, and Sony Xperia Z3. I am not going to buy a 2015 flagship that cannot last me through a typical day without requiring a charge.

I read on various Android forums where people stated battery life could be fine if you shut down apps, wireless radios, and more. I'm sorry, but I don't believe consumers should have to turn off things they use all the time just to make it through the day. Other phones have shown they can make it so there really is no excuse.

While using the Samsung Galaxy S6 Edge, I was constantly monitoring and thinking about my remaining battery capacity. You shouldn't have to live like that in 2015, especially when paying nearly $1,000 for a phone. HTC's One M9 did not do much better for me either and could also not make it through my typical day.

The Galaxy S6 Edge is a gorgeous device with an amazing camera, but these are not enough for me in 2015. The HTC One M9 is a rock solid piece of hardware with a cool design, but HTC should have included OIS and also had flawless camera performance knowing that was the major issue people had with the M8.

So far, I am a bit disappointed with the two Android flagships launched in 2015. They are both solid devices and millions will be pleased with their purchases, but neither meets my needs and all of you will have to make your own purchase decision.

It's likely we will see the LG G4 later this month and I look forward to checking it out. Sony should be releasing the Xperia Z4, but given its poor record of supporting US carrier devices I am not holding out much hope for that device. If Motorola can improve the camera significantly, then the next Moto X may just be my next Android smartphone.

Now that I am back to using the Apple iPhone 6 Plus as my primary phone, I'm swinging by the New York Apple Store tonight to try on an Apple Watch to help me make an informed decision.

I just realized I wrote this prediction back in February before I had a chance to try the two new Android phones. I was hoping that at least one of those phones would prove me wrong.